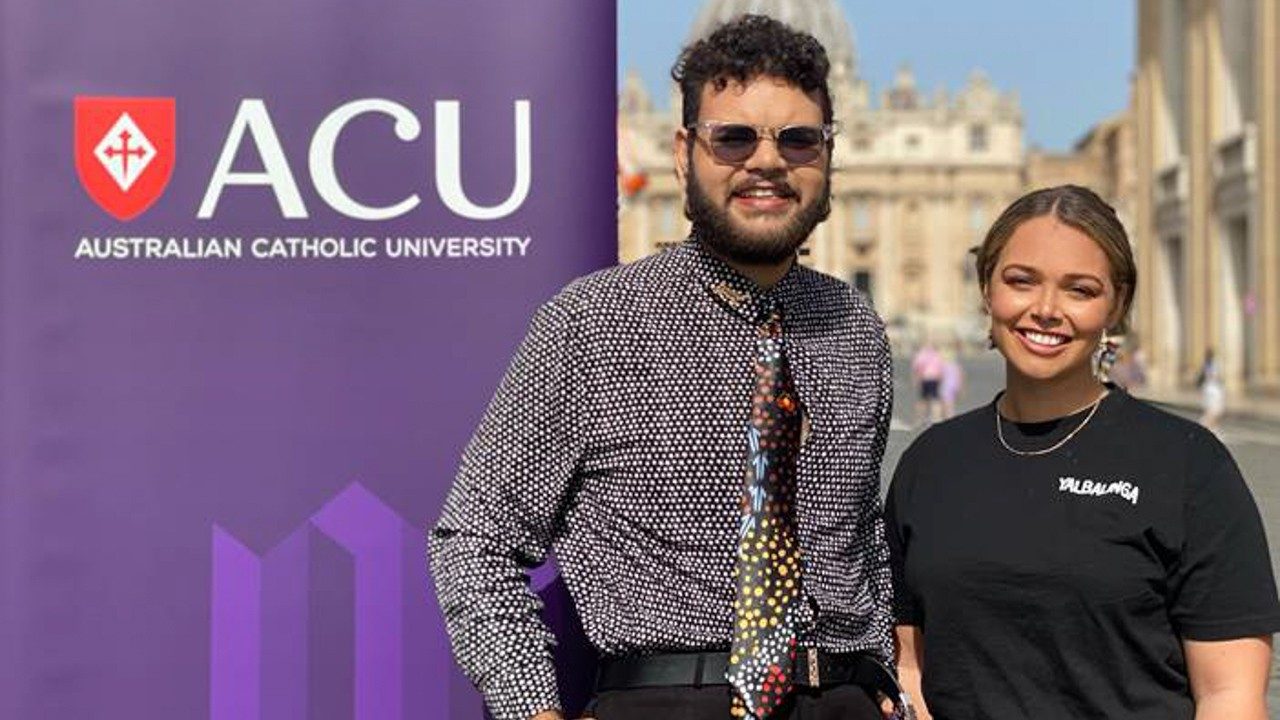 This year’s recipients of the Francis Conaci Scholarship, given annually to Aboriginal or Torres Strait Islander people, describe the importance of preserving one’s culture and how this can be done through education.

As First Nations people, Hayden Kubler and Jedda Ellison have been “stewards of creation, or at least of Australia, for a very long time.” They say they like to call themselves ‘traditional custodians’, as opposed to ‘owners’, because the land is ‘almost part of our family’.

Hayden is a person from Gurreng Gurreng and Tanna Island, Jedda is a proud Yuwibarra woman, and both are recipients of this year’s Francis Xavier Conaci Scholarship, awarded by Australian Catholic University, ACU, and the Australian Embassy to the Holy See. The Conaci Scholarship is named after a young indigenous student who traveled to Rome to train as a Benedictine missionary in 1849. Dressed as a Benedictine by Pope Pius IX, he died in Rome shortly before his 12th birthday and was buried in the Basilica of Saint Paul Outside the Walls. The scholarship is awarded annually to Aboriginal and Torres Strait Islander students. This year, after a two-year break due to Covid, Hayden and Jedda had the “honor” of receiving it together.

The two scholars said their trip to Rome helped solidify their culture and beliefs and they felt honored to have followed in the footsteps of Francis Conaci.

Both academics are studying to become teachers, and they believe that “bringing culture into the classroom” is the way to build respect which they say is somewhat lacking in Australia, and a way “to all Australians to be proud of our country’s history”. ”, just like people are in Rome.

After three weeks of studying in Rome, Hayden and Jedda noticed the pride people have in the city’s history and the respect they have for ancient places and places of worship.

“It’s really important for us personally to have our culture in the classroom, both as students, ourselves and as future teachers, because that’s how we build respect. for future generations and enable Australians to be proud of our country’s history,” Hayden explains. Indeed, he adds, “like Catholicism, we like to think of our culture as a living, ever-breathing and evolving culture, rather than just a stagnant thing of the past. It also means that our students speak our language, which, like all other languages, is constantly evolving”.

Australia has two groups of First Nations who constitute the main indigenous peoples: the Aborigines and the Torres Strait Islanders. One of the most important aspects of preserving people’s culture and identity is that it enables “the preservation of cultural practices that have allowed us to live on the land sustainably,” Hayden notes. Australia is suffering the consequences of the climate crisis. In recent years, in particular, bushfires have destroyed bushland and forests, as well as homes. However, the researchers point out, Aboriginal and Torres Strait Islander people have always been part of the ecosystem, never damaging the earth’s assets to their advantage. “We have a practice in Australia of traditional fireback which prevents a lot of these fires. We’ve been doing it for so long, in fact, that many of our natural native trees or plants are dependent on fire and even our animals participate in burning, such as the firehawk which uses fire specifically to hunt,” Hayden said.

In addition to the fires, Jedda added, “our Torres Strait Island brothers and sisters are slowly going underwater with rising sea levels.” The Torres Strait Islands are a collection of islands just north of Queensland, and “like the rest of the Pacific” they are particularly vulnerable to sea level rise. “It’s really starting to have a very physical impact real and, unfortunately, because it only happens to a certain kind of people, it doesn’t get the respect and urgency it deserves.”

“Being able to preserve our identity will in turn preserve Australia’s climate, which is also part of integral ecology, as Pope Francis mentions in his Laudato Si’.”

And just like the climate, Jedda and Hayden feel unprotected in Australia. “We’ve had private mining companies destroying our sacred sites and destroying our places of history,” Hayden said, noting that his island, K’gari, Queensland, the largest sand island in the world, n reverted to its traditional name only after years of being called Fraser Island. The island is named after Eliza Fraser, who was shipwrecked on the island in 1836 and lied about being abused by the Butchulla people. Although his accounts were later refuted, his narrative reinforcing stereotypes of Indigenous peoples as “savages” and “cannibals” had a detrimental effect.

Coming here has been refreshing, Hayden said, expressing amazement at the number of different countries and how crossing a border reveals a completely different culture. “I think as Aborigines we are lumped together as one Aboriginal group, whereas we have hundreds of different crowds there or in different countries in Australia. So you can’t always just say Indigenous,” he pointed out, because like in Europe, cultural differences include culture shock. Life on the west coast of Australia, for example, is very different from life on the east coast.

It was refreshing and interesting, he concluded, to see our classmates identify with us. “Coming here,” he says, “made me feel more indigenous.”

One month after the start of the academic session, the school is not yet open