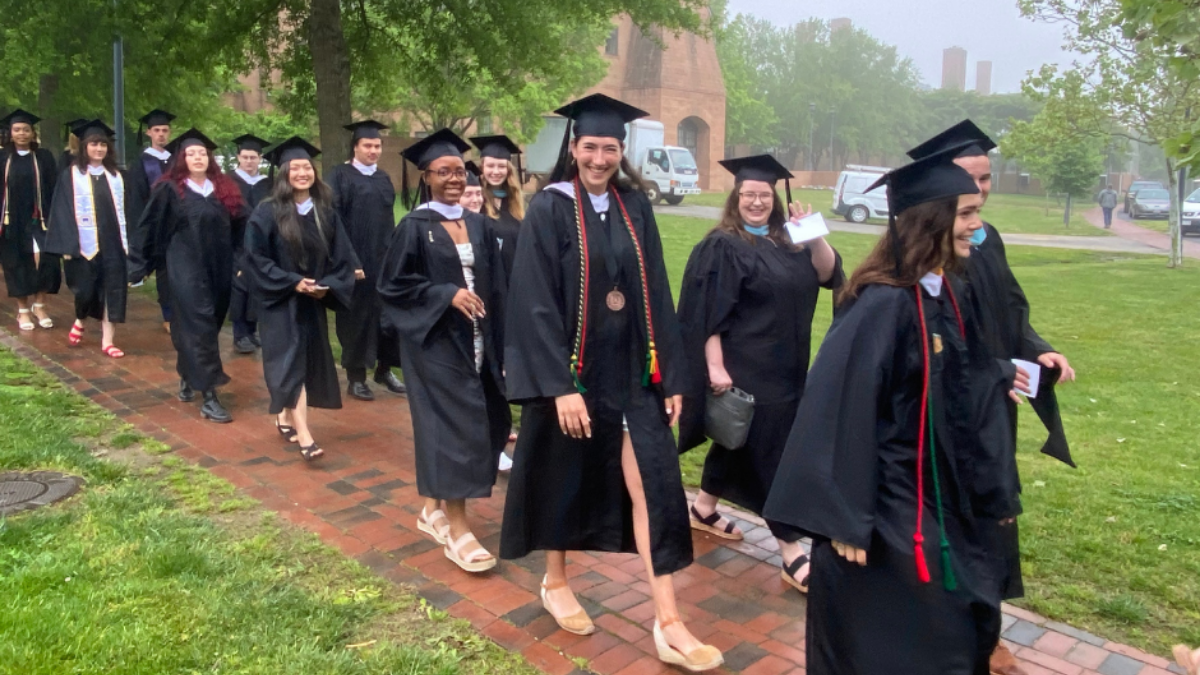 ST. MARY’S CITY, Md. — St. Mary’s College of Maryland, the National Public Honors College, graduated 375 students with a Bachelor of Arts, Bachelor of Science, and Master of Arts in Education on Saturday, May 14, outdoors on campus’ Townhouse Green .

The keynote address was delivered by Terron Hillsman, Director of the Ecological Sciences Division of USDA-Natural Resources Conservation Services (NRCS). His message to the class of 2022 centered on the importance of resilience and the “gift” of hope to others. In his address, he shared with the audience examples of challenges and opportunities he encountered while interviewing several seniors at St. Mary’s College.

Hillsman, who has worked with the NRCS for 30 years, is responsible for the development and maintenance of the National Conservation Practices Standards and Plant Materials Program. He earned his bachelor’s degree in agriculture from Tennessee State University; a master’s degree in organizational management from Tusculum College; and a doctorate in business administration from the University of Tennessee. He received the honorary degree as an “agent of change” and for his “positive and lasting impacts” on the agency he works for, Dyer said.

Dr. Brewster, who directs the St. Mary’s County Health Department, provides medical advice in public health decision-making and represents the county and the health department on local, state and local committees. national health issues. She earned a BS in biology; a master’s degree in public health; and an MD, all from the University of Miami in Florida. She received her honorary degree as “an integral part of the College’s response to the pandemic,” Dyer said. “We remain resilient because we have you by our side, day after day.”

This year, five students had the honor of being valedictorians. These students are: Harrison Bauman, Caitlin Hall, Sydney Lipsman, Charlotte Mac Kay and Jacinda Thomas. A lottery led to Caitlin Hall delivering the remarks to the Class of 2022.

In her remarks, Hall, a double major in anthropology and history with a minor in museum studies said, “My classmates: we did it. Despite how many times we have been asked to live, work and learn through unprecedented times, we have succeeded. What I’m most proud of is the continued sense of community we’ve built and maintained, no matter how many times the word “unprecedented” has been thrown at us. »

President. Jordan accused the Class of 2022 of the following: “You did well here at St. Mary’s College of Maryland, where you studied and learned in the finest liberal arts tradition. As you ‘navigate from this to that’ as you move beyond the banks of this river into the world, I expect you to use your passions, your skills and the knowledge you have acquired here to create a fairer and more humane world. society for all. »

The ceremony was streamed live and can be found at https://www.smcm.edu/2022-commencement/

Caitlin HallHe is a double major in anthropology and history with a minor in museum studies. A Sullivan Scholar, she is president of the Anthropology Club and has interned at the Maryland Archaeological Conservation Laboratory, the Annapolis Maritime Museum and Park, and here on campus.

Sydney Lips is a double major in English and International Languages ​​and Cultures: Spanish. She is a member of Phi Beta Kappa. She worked as a peer leader in the peer mentorship program and was a member of the student conduct council.

Charlotte MacKay is a double major in English and Political Science. A member of Phi Beta Kappa, she is the editor of Point News and has completed numerous internships on and off campus, most recently with Lutheran Immigration and Refugee Services as a refugee advocate.

Jacinda Thomas is a psychology major with a minor in English. She is a member of Phi Beta Kappa. She is president of the academic chapter of Psi Chi, the Honor Society of Psychology. She has been a research assistant and a SURF fellow; she was also a peer mentor and a mentor for the freshman seminar program.

About 1,600 students attend the college, nestled on the St. Mary’s River in southern Maryland.