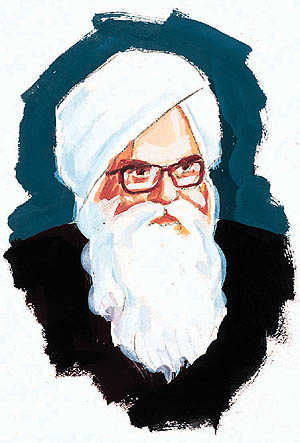 Poets, scholars and admirers of Bhai Vir Singh, the father of modern Punjabi literature, gathered in the nation’s capital on Sunday to mark his 149th birthday and remember his glorious legacy.

Former Prime Minister Manmohan Singh is Chairman of Sadan, a leading literary and cultural organization established in 1958 to promote the legacy of the holy poet.

The function began with the recitation of Bhai Vir Singh’s poems and readings of his works followed by a “kirtan” recital by Bhai Gurmeet Singh Shant, Hazoori Ragi Sri Darbar Sahib, Amritsar, and a literary tribute to the scholar- theologian by Professor Jaspal Singh, currently a member of the National Commission for Educational Institutions for Minorities.

Professor Singh spoke about the life and times of Bhai Vir Singh and highlighted the literator’s message on ecological conservation.

Gursharan Kaur then published a special issue of Khalsa Samachar, a weekly founded by Bhai Vir Singh in 1899, as well as recent books published by Sadan, to mark the 400th anniversary of the birth of Guru Tegh Bahadur.

On this occasion, Gursharan Kaur, Preneet Kaur and Professor Singh jointly honored three students from the Punjabi Department of the University of Delhi, who received the Bhai Vir Singh Gold Medal from the university for dominating the course of master’s degree in Punjabi in the past three years.

A host of Bhai Vir Singh admirers joined the event online from India and abroad.

DCHS Student, Teacher and Parents of the Month Award