After retiring from the school named in her honor, the principal tackled polio

Stitt quickly found a new vocation. At 67, she joined the Rotary Club of Arlington Heights and Rotary International’s role in the Global Polio Eradication Initiative. She remains an active member as Rotary celebrates World Polio Day on Sunday.

“I grew up with different people getting polio in small towns,” says Stitt, 96, who lives in an assisted living apartment in The Moorings of Arlington Heights. She vividly remembers the sister of a classmate who contracted the infectious polio virus when she was a student.

“She fell ill and died over the weekend. These things you remember,” said Stitt, who has become a leader in the international effort to eradicate polio. In 2011-12, Rotary International awarded Stitt the International Service Award for a Polio Free World in recognition of his “important and active personal service towards the goal of polio eradication”.

“Four times I have been to India for polio treatment, four times to Nigeria, another time to Niger,” says Stitt. She has no idea how many doses of the life-saving vaccine she has distributed, but remembers the welcome she received from people living in huts in rural tribal communities in Nigeria.

“We went door to door,” Stitt says. “Every time you go to help people they get excited. A lady came over and said, ‘I remember you from the last time you were here. “I made some wonderful, wonderful friends. People are the same all over the world, aren’t they? We’re just a little different.”

Since Rotary’s first project to immunize children in the Philippines in 1979, members around the world have donated more than $ 2.1 billion and lobbied governments to spend an additional $ 10 billion to immunize children. At the Arlington Heights Village Board of Directors meeting on Monday, Mayor Tom Hayes presented a proclamation recognizing Sunday as World Polio Day to Betsy Kmiecik, president of the Rotary Club of Arlington Heights, who spoke of the Rotary End Polio Now campaign.

“I think it really paid off,” says Stitt, noting that when Rotary launched the polio eradication campaign, 1,000 children a day were contracting polio. “This year there have only been two cases, one in Afghanistan and one in Pakistan.”

She remembers seeing the devastating effects of polio on markets in Africa.

“You just saw people on the floor, crawling on the floor,” Stitt says. She befriended a paralyzed 17-year-old who studied and started a business that transforms bicycles into wheelchairs. She not only paid for a wheelchair for a child in need, but she also invited the inventor to speak to the children of Olive-Mary Stitt. 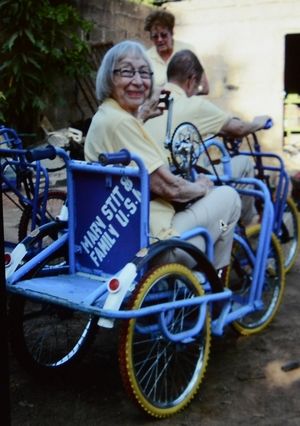 At the age of 87, retired director Mary Stitt of Arlington Heights presented this wheelchair made from a bicycle to a child in Nigeria as part of her work with Rotary International to eradicate polio . Now 96 years old, she remains active in Rotary.
– Courtesy of Mary Stitt

“Look at what it did to people, how they cooperated with each other,” Stitt says of the vaccination effort which has enjoyed the full cooperation of the public, in contrast to the current pressure to vaccinate people. against COVID-19.

“I don’t understand the attitude today. After (President) Trump, we don’t trust. Why is that?” says Stitt, who remembers enforcing mandatory health rules for teachers and students during her years as a principal. “For years, I had to make sure all the kids had their shots by October 30.”

Tuberculosis was a health problem then, and Stitt recalls visiting a van in an Arlington Heights parking lot where medical staff made sure she did not have tuberculosis. “You were to have a chest x-ray, and the teachers didn’t object to that,” she says. “It’s what you do to help others. We should be keepers of our brothers, you know.”

She grew up with this philosophy as Mary Morrison, the child of Methodist pastor David T. Morrison and his wife, teacher Mallie Tapp. She was born in the tiny hamlet of Williamsville, Missouri, in the Ozarks, and raised during the Depression. Her work as a volunteer with Rotary International to eradicate polio took Mary Stitt, retired director of Arlington Heights, India, Nigeria and Niger, where she made friends, made an impact. and won awards.
– Courtesy of Mary Stitt

Her parents met at Vanderbilt University and always had an emphasis on education as they moved to where her church work was needed.

“I lived in small towns where there was no library. I lived in seven different places, three or four years at a time, ”says Stitt. “And it was really fun.”

Interested in science, she graduated at the top of her class of four girls and seven boys in Linneus, Missouri, in 1942, and enrolled at Central College, which is now Central Methodist College in Fayette, Missouri. As World War II raged, a semester before she graduated she married another student John Stitt, who joined the Navy and served on a ship bringing troops home after the war. . After the war, they bought a house in Saint-Louis and started their family.

A neighbor convinced her to become a substitute teacher, replacing a junior high school teacher who couldn’t handle the stress of all these kids. “I had my own kids, so I didn’t mind,” says Stitt, who took two night classes at the University of Washington. “It was wonderful. I loved it.”

A mother of four at the time, she became a full-time student the following year and graduated from Washington University in 1955 with the idea of ​​being a teacher. Pregnant with her fifth child, she delayed this plan for a year. Living in Riverview Gardens, near the Chain of Rocks Bridge that spans the Mississippi River on the north side of St. Louis, she taught eighth grade science for four years. When her husband got a sales job in Chicago, she got a teaching job in Park Ridge and they bought a new home in Arlington Heights. Not only does she have an Arlington Heights school named in her honor, but retired principal Mary Stitt has also won awards for her leadership and work with Rotary International’s global campaign to end polio.
– Brian Hill | Staff photographer

In 1961, she was hired as a science consultant by District 25, traveling from school to school to help teachers. “I worked in all the schools. My office was the professors’ room, ”Stitt says.

She divorced, so her mother looked after the children for three consecutive summers as Stitt returned to Washington University to earn her masters degree. In 1967, she was appointed principal of the Olive School, where she introduced experiential learning, multi-age and open classrooms, and other progressive ideas. The school’s reputation has attracted visitors from all over the country.

“The philosophy was that you learn by doing. You can’t just read it in a book,” Stitt says. Every Friday afternoon the school had an activity period where the students learned science, cooking, acting or any other interest, “and the kids loved it”. A highlight of the multi-age class was when an older child taught a younger child to read.

“I just think that’s the point of life, to help each other. It really is,” Stitt says. She is the mother of Karen Snodgrass, John Stitt, Bonnie Jannasch, David Stitt and Carolyn Heffner, who recently made a quilt with T-shirts from Stitt’s trips to polio. She also has 11 grandchildren and is expecting her 14th great-grandchild soon. Mary Stitt loves this quilt her daughter Carolyn Heffner made using T-shirts from Stitt’s many trips abroad as part of Rotary International’s campaign to end polio. The 96-year-old retired Arlington Heights manager has won awards for her work in the fight against polio.
– Brian Hill | Staff photographer

Whether learning about infectious diseases or other cultures, education has always been at the center of her life.

“I’m just eager to learn,” Stitt says. “If you have a mind that wants to learn, there is a lot to learn in the world.”