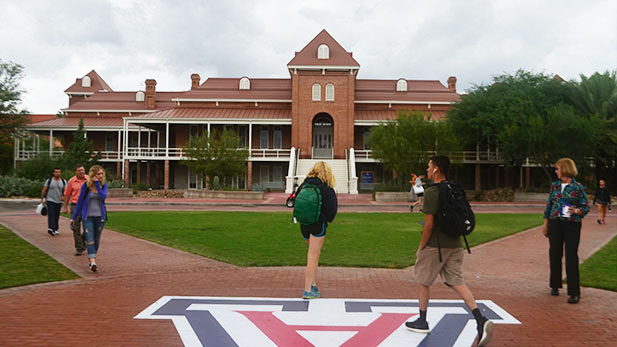 More than 100 instructors at the University of Arizona sent their provost a letter arguing for the right to teach at a distance when the semester begins Wednesday amid the latest wave of COVID cases.

In a letter Monday, instructors from the United Campus Workers Arizona union sent a letter to Provost Lisel Folks in response to a memo from January 7 of Provost Lisel Folks in which she stated that they were to deliver education in the mode for which the students registered. They also criticized administrators’ decision to start the semester with in-person classes “despite a significant increase in COVID-19 infections and Tucson hospitals at maximum capacity.”

The union also asked the university to virtually start the spring semester.

“It’s not containment. It takes a temporary break, goes remote for a week or two, tracks numbers and responsibility for meeting the needs of our students, ”said Gary Rhoades, AU higher education professor and member of the United Campus union. Workers Arizona.

Instructors contend that academic freedom allows them not only to teach content of their choice, but also to deliver content in any way they see fit. Any attempt to discipline them to teach at a distance will be seen as a violation of academic freedom, they said.

Logistical issues such as the progress, consistency and fairness of course delivery to all students can only be decided by individual instructors, ”the group said in the letter. “These questions should not be dictated by those who do not work in a classroom. If the central administration does not guarantee safe classrooms, then individual instructors must use their discretion to prevent the spread of disease and ensure equitable delivery of the curriculum to all students. “

Professors and instructors can work with their department heads on temporary adjustments to course modalities if they are positive, Folks said in the memo.

The university encourages other concerned instructors to contact their department heads or human resources, the institution said in an email to KJZZ News, adding that any proposed changes to teaching arrangements will need to be approved by the university. academic unit and the provost’s office so the university can be confident that it is meeting the needs of its students, to the best of its ability, during these difficult times.