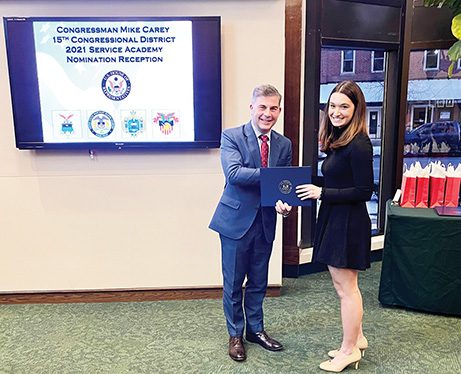 Elizabeth Agostino was appointed to the United States Naval Academy. Agostino attends Bishop Ready High School and is the daughter of Ralph and Amy Agostino.

“The appointment of these outstanding students to American military academies is a privileged duty as a member of Congress,” Carey said. “I thank these brave young men and women for agreeing to serve our nation and I am confident that they will cherish the memories they created by becoming commissioned officers, just as I did 31 years ago. I would also like to thank the Ohio 15th District Academy Examination Board for their thoughtful recommendations and assistance in interviewing students.”

In pursuit of an appointment to a U.S. military academy, students submit their applications and are interviewed by the Carey Military Academy review board. The board evaluates students on academic performance, leadership ability, and community involvement.

To receive a Carey Service Academy nomination, applicants must be a single resident of Ohio’s 15th congressional district, a United States citizen, and between the ages of 17 and 23. Qualified individuals interested in pursuing an appointment to one of the United States Service Academies should visit www.carey.house.gov for more information or contact Carey’s office at (202) 225-2015.

Editorial: A San Felipe scholar will lead the Smithsonian into the future