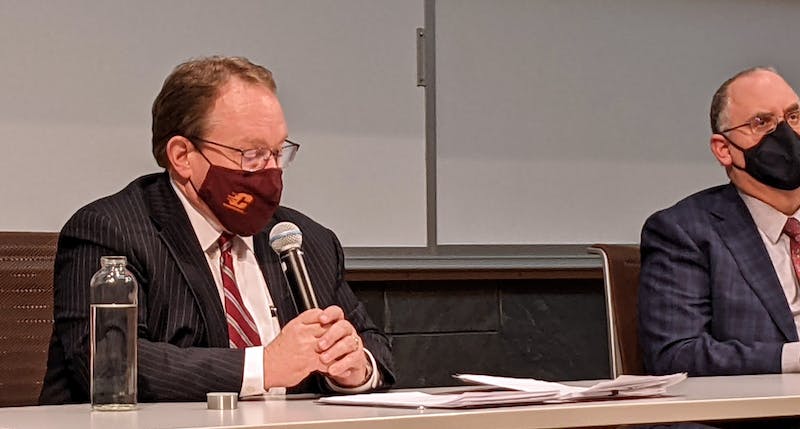 The Academic Senate heard a statement and questions about honors program issues from the president of the Student Government Association.

“Since the fall of 2020, when new leaders took over the honors program,” Idema said, “honors students have had great concerns about what appears to be the covert and systematic destruction of our program. Nationally Recognized Honors Award.”

Idema’s list of concerns included the elimination of two positions of associate director and the program’s academic advisor. She also said two office professionals quit and two of the 12 student workers returned in fall 2021.

Idema said the removal of the two associate directors was a “ruse” by the honors branch to revamp the program after staff raised concerns about the state of the program.

One of the report’s observations stated that there was “insufficient evidence” to support a claim that workplace violence, as defined by CMU policy, occurred in the office of the honors program on April 1, 2021.

President Bob Davies said the incident involved “loud voices and slamming doors” in the honors program office. Davies said the event was not considered a “toxic work environment” because the incident was classified as a report of workplace violence. Idema and Senator Will Anderson questioned the handling of the situation.

“Why has the report chosen to call the threatening and intimidating behaviors involved in the April incident workplace violence,” Idema said in its statement. “Was it so they could say workplace violence didn’t happen even though an employee was harassed, berated and bullied for almost an hour?”

“And why didn’t the report mention that the person who harassed and intimidated – Julia Johnson – is no longer employed at CMU?”

Anderson asked why the report is published now if it was completed in October 2021. Davies said a draft report was created then but not finalized until February 2022.

Senator Martha Frank questioned why administrators were chosen to lead the review instead of an “impartial” third-party company. Frank referred to the investigation by three journalism staff, which brought in an outside firm.

Mary Martinez, acting executive director of the Office for Civil Rights and Institutional Equity, and Beth Timmerman, director of internal audit, were appointed by CMU to lead the review.

“It seems to me what we had here was directors investigating other directors,” Frank said. “I don’t see how it can be anything other than biased.”

Davies said he saw no conflicting interest in how the review was conducted, as reviews like these are part of Martinez’s and Timmerman’s positions.

Senate President Katrina Piatek-Jimenez read a statement from a member of the Honor Council, who said the council did not vote to approve the report. She also said Davies was invited to the April 25 council meeting to answer questions about the report.

Acting Provost Provost Richard Rothaus said a subsequent meeting will be required to answer questions in Idema’s statement because there were “far too many questions, far too quickly” to answer during the Senate meeting. Davies also said he would be willing to meet with Idema next week to answer his questions.

Piatek-Jimenez said the discussion should take place at a Senate meeting or in a public forum.

“Every question Senator Idema has just read are questions I’ve heard at least a dozen times from members of the entire CMU community,” Piatek-Jimenez said. “These are not questions that Idema asks, they are questions that all professors, students and staff who have ever touched the honors program ask themselves.”

Idema said she wanted the discussion to be public so more people could attend. She said she was unhappy with Davies and Rothaus’ responses at the Senate meeting.

Idema’s full statement and list of questions can be viewed below:

The Senate also discussed proposed revisions to CMU’s Student Opinion Survey (SOS). According to Senator Brad Swanson, one of the goals of the changes is to reduce the chances of student bias in responses.

Piatek-Jimenez said many questions are prone to bias, especially for professors who are women, underrepresented minorities or have accents.

“A lot of our current questions in the SOS are likely to be biased,” Piatek-Jimenez said. “They’re basically different formulations of ‘do you like your teacher?’ Research shows that these are the types of questions that bias flooding.”

The new survey, if approved, would hopefully be analyzed over several semesters to see if it reduces biased responses, Piatek-Jimenez said.

Academic Senate meetings take place at 3:30 p.m. every two weeks on Tuesdays in the French Auditorium. Live stream and recording links can be found on the Senate website.

The next and last meeting of the semester will take place on May 3 at 4 p.m.