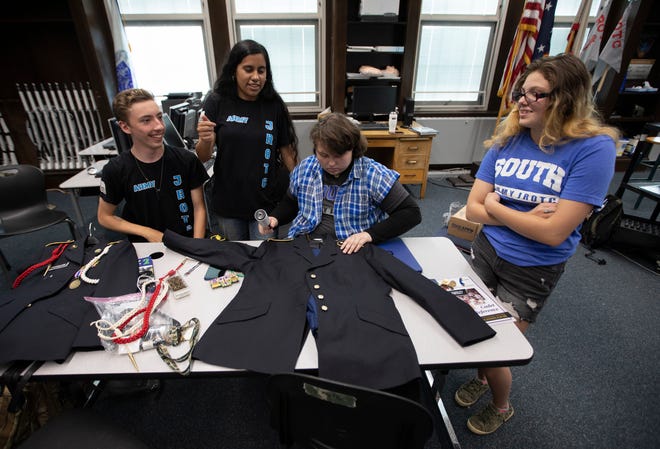 Inside the cavernous camouflage-themed classroom at Columbus South High School, JROTC cadet Abby Hutton tied a black blindfold, then waited – admittedly nervously – for someone to give her orders to that she could dodge the orange cones that surrounded her as she tried to complete her mission.

This mission consisted of picking up a strategically placed golf ball while avoiding all of the cones – each representing a landmine – and exiting the area safely.

Sounds easy enough, right? But other cadets were giving different orders in an attempt to trip her up. Moren’s voice was the only one she had to follow. Discipline, teamwork, leadership, confidence, problem solving – these essential skills were all at stake here.

It was Thursday afternoon training for the four teens who will make school history on Tuesday and Wednesday when they face up to 40 other teams from the Junior Reserve Officer Training Corps in Washington, DC. DC, in the JROTC Leadership & Academic Bowl, South High School’s first team to earn a spot, and the only Ohio Army JROTC program competing this year.

â€œIt’s exciting. This is a chance to be the best in the country,â€ said one of the program’s instructors, Master Sgt. Benjamin Zumock, who retired from active duty at Army and took over this program in 2016. “We are already the best in the state. Showing the leadership skills they have learned in this program only builds their confidence in how they will be successful in life. .

This is the raison d’Ãªtre of the JROTC of each military branch: the future.

Although all JROTC programs in high schools follow the military command structure, disciplines and principles – such as physical training, ceremonial drills, the appropriate uniform code, and obtaining ribbons and awards – l The goal is not necessarily to create future Soldiers, Airmen, Marines or Sailors. The larger goal is prominently displayed in the program room on the second floor of South: “To motivate young people to be better citizens.” “

And that’s exactly what happened to those four cadets heading for Washington.

Moren, a 17-year-old who hopes to become a math teacher, is the commander of the Bulldog Battalion of 68 South Cadets, one of only three JROTC programs in schools in the city of Columbus. He said his personal growth has been marked.

â€œConfidence. I just got a little more confidence in myself and I’m able to talk to people more,â€ he said. â€œAnd I’ve learned to ask for help when I get it. It is about working together as a team.

At the national competition, cadets will take two written tests – one covering JROTC courses and the other covering the principles of good leadership as espoused by three historic generals, Douglas MacArthur, Colin Powell and George Marshall – then will compete in trouble. solve tasks such as the one they practiced while navigating simulated minefields.

In addition to Moren and Hutton, a 16-year-old junior, also on the squad are Elizabeth Portalatin, 17, and Miranda Parsley, 16.

Both Hutton and Parsley have said they are anxious, but happy with what awaits them in Washington.

For Portalatin, who wants to become a doctor after graduation, it’s a feat she once thought she would never see. Just a few years ago, her father abandoned the family, she said, and left her virtually homeless. She bounced from house to house, which made her shy, calm, introverted and “deep in the dumps”.

Zumock visited her eighth grade math class and his speech intrigued her. But then she moved. When she returned to the South for her sophomore year, she signed up for JROTC and never looked back.

The leadership skills she acquired – Zumock now holds the rank of command sergeant major on the battalion – are invaluable, she said.

“I’m so glad I did it,” she said Thursday as she and the others huddled around a classroom table and worked together to keep Parsley’s uniform in top shape. for this important competition. â€œNow I have a place to call my family. They are my family. “