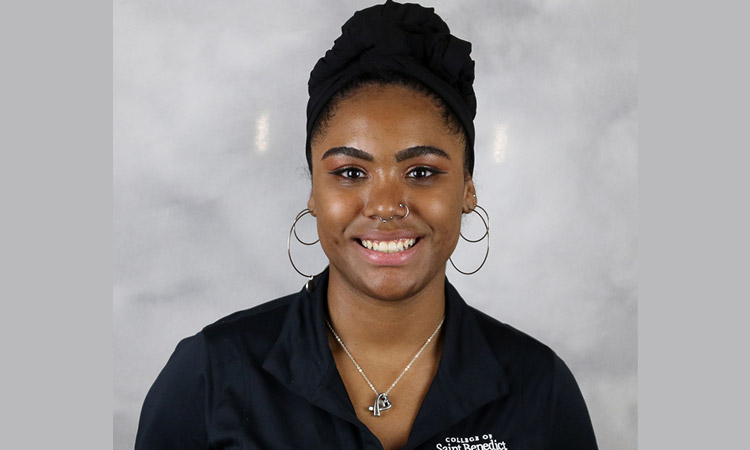 Sydney Robinson ’19 was unsure of her chances when she decided to apply for a place in the NASPA (National Association of Student Personnel Administrators) Student Affairs Administrators in Higher Education Now Professionals 2022 Cohort, which recognizes the outstanding contributions of new professionals and graduate students within the organization.

But the head of the Diversity and Inclusion program at the CSB/SJU Multicultural Center decided to give it a shot. And of course, Robinson — who is also pursuing a master’s degree in higher education administration at St. Cloud State University — was selected in recognition of her work on inclusion.

It is one of NAPSA’s five fundamental pillars, along with integrity, innovation, research, and impact.

“It was honestly a shot in the dark,” said Robinson, whose role at CSB/SJU means she works directly with programs and organizations focused on women’s leadership, peer mentoring and diversity, Equity, Inclusion and Justice (DEIJ) initiatives.

She is also an advisor for Advocates for Inclusive Mentoring (AIM), a group that works to strengthen the personal development and leadership of traditionally underrepresented CSB students through collaborations with various university groups on campus.

“But I said to myself that if I didn’t try, it was already a no. Even though it was said to be for people in their freshman year (on the job) like me, I figured there were still other people doing more than me.

Malik Stewart, director of multicultural student services at CSB/SJU, has seen firsthand the impact Robinson has had since returning to his alma mater a year ago. And he said the honor was well deserved.

“It’s no surprise to me that Sydney is being recognized nationally for her work,” Stewart said. “We are lucky to have him back at CSB/SJU in a professional capacity. His leadership was felt on campus, but also and above all in the individual lives of our students.

While a student at CSB, Robinson served as Vice President of CSB’s Student Senate and in other leadership roles on campus, including with AIM. But the Las Vegas native said she was ready to move to new places after graduating three years ago.

But a call from CSB Vice President for Student Development Mary Geller changed those plans.

“She said they needed me,” Robinson recalled. “When I left, I felt like I had graduated and done everything I could on this campus. It was time to pass the torch to the next generation of leaders. But the inclusive mentorship program has been so important to me as a student. I couldn’t resist the opportunity to come back and continue to be part of this fellowship.

And she said she continues to be passionate about the work that remains to be done at CSB/SJU.

“I would like to retire from a job,” she said. “But there will always be ways to work to take the inclusivity here to another level. And as long as there is still work to be done, I will continue.

“It’s officially been a year now in February and I still feel like there’s always something new to work on every day. There is always someone else to defend.

Republicans have largely become a party of extremists: academic