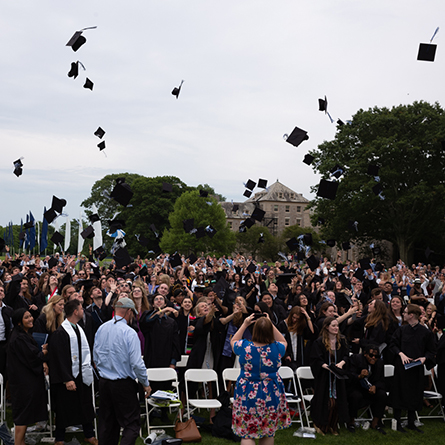 Speaking out while graduating from college was a lifelong dream for Viridiana Villalva Salas ’20, a first-generation college student and the daughter of two Mexican immigrants. She was thrilled to learn that she had been selected to address her classmates at Connecticut College’s 102nd Commencement in May 2020, and she was eager to share a poem she had written to honor the sacrifices and the support from his parents.

Then COVID-19 spread around the world and Conn quickly transitioned to fully distance learning courses. The launch has been postponed indefinitely.

“It’s an honor for me to stand before you today, to look into the faces of some of the brightest, most driven and resilient people I’ve ever had the pleasure of calling my friends.” , she told the more than 300 members of the class. of 2020 who returned to campus this weekend to finally celebrate their considerable achievements in person.

“As we sit here, moments away from finally taking this step, I want you all to think back to two years ago when most of us were on our last week off, and we discovered that we wouldn’t be coming back to complete our senior year on campus.Think back to when you started your current masters, doctoral, and fellowship programs, or when you applied for your first job after college. Think back to when the world came together to protest the murders of George Floyd and Breonna Taylor, and the world you knew seemed to cease to exist forever. I ask you to remember those historic moments during two years to remind you of the strength we all possess, and that is what we are here to celebrate today.

Villalva Salas, a Posse scholar who majored in English and earned a certificate from the Holleran Center for Community Action and Public Policy, reflected on all her classmates had accomplished, first as students, then as graduates during a time of great uncertainty. Members of the “COVID-19 class” started new careers, moved to new cities, earned additional degrees, and began making their mark on the world; Villalva Salas spent a year teaching in downtown Chicago, then began graduate school at Boston College’s Lynch School of Education and Human Development. Last month, she earned a master’s degree in curriculum and teaching and a certificate in social justice leadership.

“The Class of 2020 is filled with people who dream of a fairer, fairer, and more radical love-filled world. With the support of our families, counselors, teachers, class deans, coaches, and classmates, I believe that we have accomplished and persevered through more than any other class in the past decade,” she said.

Then, Villalva Salas finally had the opportunity to share the poem she had written in tribute to her parents more than two years earlier. (Read the full poem and speech here.)

Habla para que sepan que lo te you hold that decir is important
Speak up so everyone knows what you have to say matters
That we matter,” she recited.

“As we begin our new journeys, I ask that you press forward with the determination, dedication and devotion you have shown on this campus, and never stop fighting for a worthy future. you, even if a global pandemic tries to stop you.”