Rusty Rae/News-Register ##Jeff, the son of longtime former fire chief Jerry Smith, his grandson Justin and his daughter Marsha ride the vintage #1 engine driven by Dwight Sturm during of a parade of fire equipment on Wednesday afternoon in honor of their late father. Engines from all over Yamhill County participated in the parade, along with many veteran volunteer firefighters. 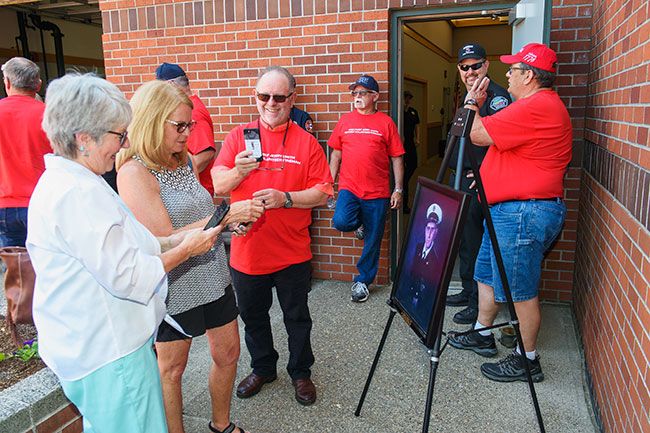 Rusty Rae/News-Register ##George Dunkel, who was a student firefighter under Chief Jerry Smith, his wife Vickie Dunkel and friend Billie Wallace reminisce about the good old days as they gathered at the McMinnville Fire Station for the dedication of a plaque and a scholarship in Smith’s honor. He was a fire chief from the 60s to the 90s.

An anonymous donor made the scholarship possible, volunteers said. It will be available to firefighters, first responders and nurses who want to improve their training, said Waldo Farnham, a longtime McMinnville firefighter volunteer.

Smith died Nov. 30, 2021, at age 91, grew up in McMinnville. He joined the department as a volunteer before assuming the management position. As a leader, he was known for modernizing the department. He helped it get more paid staff, better training and equipment, and a more professional ambulance service.