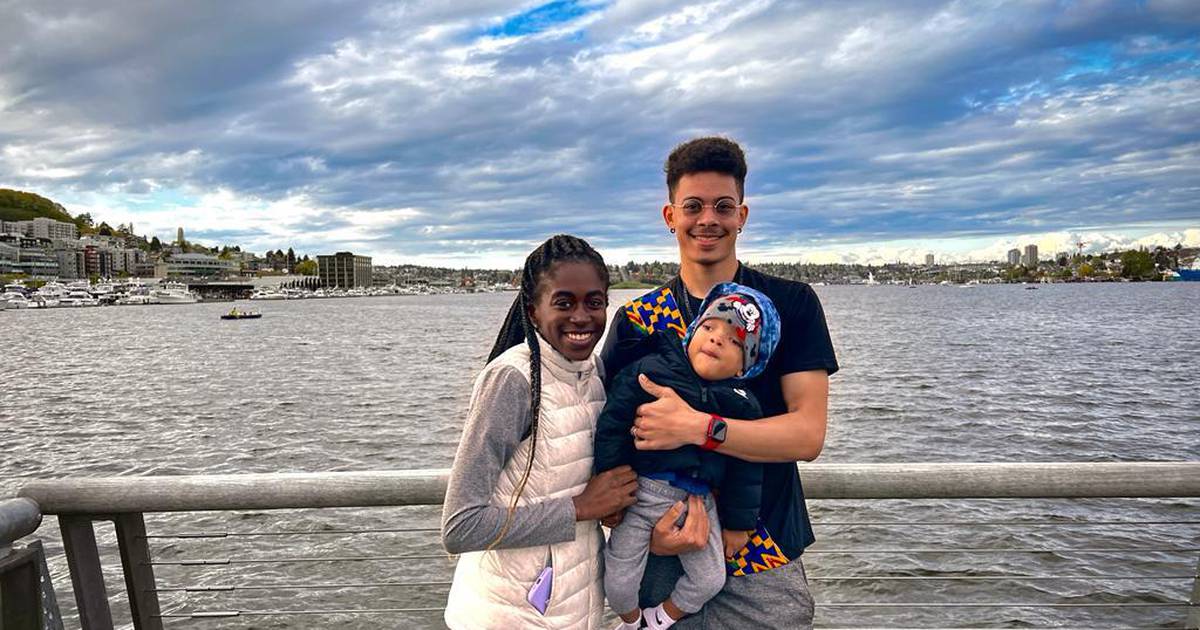 Vanessa Aniteye was a six-time All-American before retiring from competition in 2019.

But Aniteye, a former track star from the University of Alaska Anchorage and Chugiak High School, has returned in 2022 and is running faster than ever with a new source of motivation: motherhood.

“I think before I was really focused on me and on time,” Aniteye said. “Now I feel like I’m running with a purpose.”

After running at UAA from 2017 to 2019, Aniteye decided to leave the program. A few months later, she was pregnant with her son, Josiah, and married to her husband, Brandon Nicholson, who was jumping on the Seawolves track team.

Aniteye returned to competition with Seattle Pacific University, where she again earned All-American honors this spring. And despite constantly juggling studies, competition and parenthood, she’s content with where the journey has taken her.

“It’s more about how I got here,” Aniteye said. “Where I was at with my pregnancy, giving birth, and then the whole process of finding a new school, and then doing those things. I definitely run with a purpose and I feel like that’s what I’m meant to do.

The global COVID-19 pandemic caused the cancellation of the 2020 season for everyone in the country, but it ended up being something of a blessing in disguise for Aniteye, who wouldn’t have been able to compete this year anyway. -the.

“For most people it was a little disappointing, but it worked perfectly for me because I felt like I didn’t miss anything,” said Aniteye, who was born in Germany.

A major hurdle that Aniteye grew weary of after deciding to pursue her athletic career was being able to find a coaching staff that would be sensitive to her unique situation.

“You don’t know if a coach is going to trust you because you have your stats, but nobody knows if you can run like you used to,” she said.

Aniteye had been in Seattle for more than a year after having her son when she met with Seattle Pacific staff to discuss the possibility of her joining the team.

She said it was a “big leap of faith” for them to bring in an athlete they didn’t know who was pregnant and had spent time away from sports.

“I was training like crazy but no one saw it,” Aniteye said. “They had never signed someone like that before, so I absolutely had to prove myself.”

SPU’s gamble was well worth the risk. Aniteye sprinted to titles and new program records. She was a key member of the Falcons’ flamboyant 4×400-meter relay team and had her best season as an individual 400-meter sprinter.

Aniteye said that although she was happy when she found out she was pregnant, she was sure it meant the end of her sporting career.

“For a few months I was like, ‘Well, no more track for me,’ until I realized that doesn’t necessarily mean it’s over,” Aniteye said. “If you really want something, you can always do it.”

After her final season at UAA, Aniteye felt like she was nearing her personal best. But finding a role model helped her get back into competition.

“I felt like my body could still do more and I really wanted to,” Aniteye said. “While I was going through it all, Allyson Felix set the best example anyone could have set for showing that women can have kids and still compete on the track.”

Felix is ​​a recently retired 36-year-old Olympic sprinter who competes in the same events as Aniteye. After giving birth to her daughter in 2018, she returned to competition in 2019 and won a gold and bronze medal at the 2020 Tokyo Olympics.

Her bronze medal came in the 400 meters and she helped Team USA win gold in the 4×400 relay for her 11th and final Olympic medal and her seventh gold medal.

“It was very encouraging,” Aniteye said. “Obviously it’s different for a professional sponsored athlete versus an NCAA athlete.”

Her son, Josiah, just turned 2, and even though the couple now have daycare options, it’s still difficult to find the balance.

“It gets really crazy sometimes,” Aniteye said. “My first semester when I transferred to SPU it wasn’t in daycare so I was very lucky to have online classes and practice was at 7am”

She was going to practice from 7 to 9 a.m. and hoped that by the time she got home, her husband and son would still be sleeping.

“I would take over from there and (Brandon) go to work,” she said. “I was trying to get (Josiah) to take a nap specifically during school hours, but it didn’t always work.”

She and her husband were able to get babysitting for the last term of the semester, and it was a huge relief.

“Letting him go to daycare was like ‘Wow’, it’s a relief because it was crazy before that and it’s still crazy with it,” Aniteye said. “I have to drop it off, go to practice, go to school, pick it up.”

When she’s not having her best days in training, her coaches regularly remind her that the track serves as her escape and brief respite from her parenting responsibilities.

“I don’t really have a lot of time to myself, so I can really channel and use that time,” Aniteye said. “It’s a distraction from any stress I might have with him or other things.”

Neither Aniteye nor her husband have family in Seattle, so she’s grateful to have Nicholson for support as they navigate parenthood together.

Postpartum challenges and return to competition

Despite what was considered a high-risk pregnancy, Aniteye was able to give birth naturally, but their hospital stay was extended.

“We were in the NICU (neonatal intensive care unit) for four weeks and then you have to wait six weeks before you can do anything,” she said.

She wanted to get back to training, but her body wasn’t ready even after she was medically cleared to resume physical activity.

“I had to start walking, then slowly started jogging. But I think after six weeks I started moving my body more,” Aniteye said.

She earned her seventh All-American honor and first individual after finishing sixth in the 400-meter final at the 2022 NCAA Division II Outdoor Track and Field Championships.

Her time of 53.64 seconds broke her own personal best and the SPU program record for the second time during the meet.

“I think it really exceeded all of my expectations,” Aniteye said. “For me, it was God’s plan all along.”

She hopes coaches and training staff learn to be more patient, understanding and compassionate with student-athletes recovering from childbirth, because it’s not like recovering from a typical short-term injury. and their body still undergoes changes.

“Don’t expect them to perform well from day one. They can breastfeed, their hormones can change, they have a child at home and you don’t know how much they sleep,” Aniteye said.

She wants to continue telling her story in hopes that it will inspire and motivate others who may find themselves on a path similar to hers.

“For me, it wasn’t linear,” Aniteye said. “I was training while breastfeeding. There are physical things changing in your body that make it harder for you to do this. I think it’s important to think about these things so that women can have support in this regard.