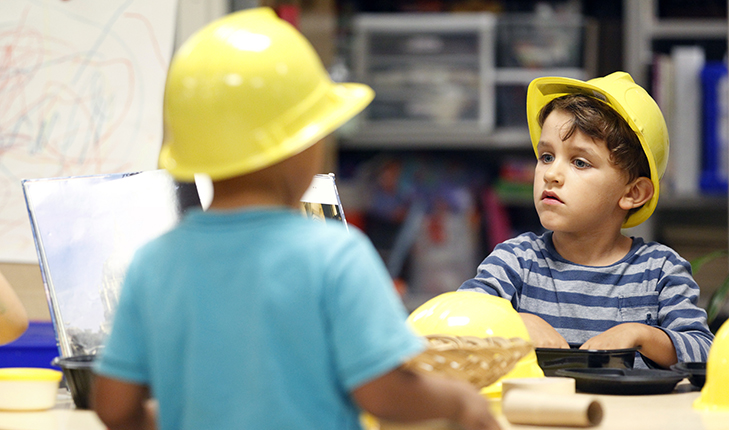 In December 2020, Fresno State alumnus Chuck Hudelson was seeking to donate to the University in honor of his mother, Mildred. He wasn’t entirely sure where he wanted his $100,000 IRA rollover to go, but when he shared his mother’s passion for teaching with the University, the decision was easy.

“Teaching just brightened my mother’s life,” he says. “Teaching children was her passion every day.”

Hudelson’s donation funded a “Reggio-inspired” classroom at the Joyce M. Huggins Early Education Center at the Kremen School of Education and Human Development.

The classroom is named after a city in Italy recognized worldwide for its innovative four-pronged approach to education. Children need to have some control over the direction of their learning; being able to learn through experiences of touching, moving, listening, seeing and hearing; having a relationship with other children and with material elements of the world that children should be allowed to explore; and have countless ways and opportunities to express themselves.

“I’m just flabbergasted that I can produce children’s programs with things I never thought they would be involved in,” he said. “Computers at such a young age, my God, that’s wonderful.”

Hudelson, who earned a master’s degree in speech from Fresno State in 1960, credits the Fresno State Teachers’ and Friends of Education Wall of Honor for inspiring his decision to donate to the Kremen school. Her mother is honored with a brick on the wall, which is located opposite the Kremen Education building.

“She was in a wheelchair when I took her to see the wall,” Hudelson said. “It was a big deal for her. That’s when I thought about giving back to Fresno State.

Mildred Hudelson only entered the profession when she was 50 years old. “It was in Iowa, where she was teaching first grade,” Hudelson said.

In 1953, after the family moved to the Fresno area, Mildred obtained a teaching position at Jackson Elementary School in Sanger. It turned out to be a defining moment for Mildred in her life, Hudelson said.

“The kids really got her excited. She was really happy with everyone and took them to the next level,” Hudelson said.

In addition to Hudelson’s mother, her two aunts and two daughters entered the teaching profession, inspired in large part by Mildred’s passion for the career.

Hudelson said it was his CPA who suggested he might consider donating cash from the IRA rollover, rather than paying a hefty tax.

“I thought I could do something more useful with that money,” he said.

At age 72, a person is required to begin taking their required minimum distribution each year. However, instead of receiving the funds directly, they can choose to donate their distribution to charity, such as Fresno State.

Hudelson then made two more cash donations of $10,000 each to the Kremen School’s Fresno Family Counseling Center and the Kremen Student Equity Scholars Fund.

“I’m just a guy who was lucky enough to have this [rollover money] available at that time,” Hudelson said. “It’s a nice surprise to know that my mother made me want to do something positive for the school.”

For more information on how to make a charitable IRA rollover, contact the Planned Giving Office at 559.278.1877.