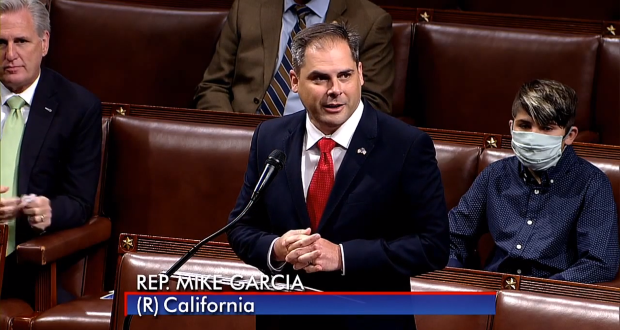 Congressman Mike Garcia, R-Santa Clarita, moved to reinstate the “China Initiative” amendment to the House Appropriations Subcommittee on Commerce, Justice, and Science to combat intellectual property theft in hands of the Chinese government.

The amendment, colloquially known as the “China Initiative,” is said to be aimed at cracking down on Chinese Communist Party (CCP) intellectual property theft that has resulted in the theft of hundreds of billions of dollars.

Originally instituted by the US Department of Justice to combat the theft of US intellectual property by the CCP, the “China Initiative” was repealed by the Biden administration earlier this year.

It is estimated that the United States has already lost between $400 billion and $600 billion in intellectual property to the CCP, according to Garcia’s office.

“The China Initiative has proven effective in combating both intellectual property theft and trade secret theft. But without substantiated justification by the Biden administration, it was repealed this year,” Garcia said. “As we know, China has implemented a policy they call ‘Steal, Replicate and Replace’, and the United States must do everything in its power to prevent the CCP from stealing our intellectual property. The Chinese Communist Party is our real enemy, and we must do everything to prevent them from using our ideas to improve themselves.

While the “China Initiative” amendment did not pass due to majority opposition, Garcia plans to continue advocating for legislation to combat CCP operations.

Click here to watch Representative Garcia’s introduction to the amendment.

KHTS FM 98.1 and AM 1220 is Santa Clarita’s only local radio station. KHTS mixes a combination of news, traffic, sports and features with your favorite adult contemporary hits. Santa Clarita News and Features are broadcast throughout the day on our airwaves, on our website and on various social media platforms. Our KHTS award-winning daily newsletters are now read daily by over 34,000 residents. A vibrant member of the Santa Clarita community, the KHTS broadcast signal reaches the entire Santa Clarita Valley and parts of the high desert communities located in Antelope Valley. The station broadcasts its talk shows on the web, reaching potentially global audiences. Follow @KHTSRadio on Facebook, Twitterand Instagram.