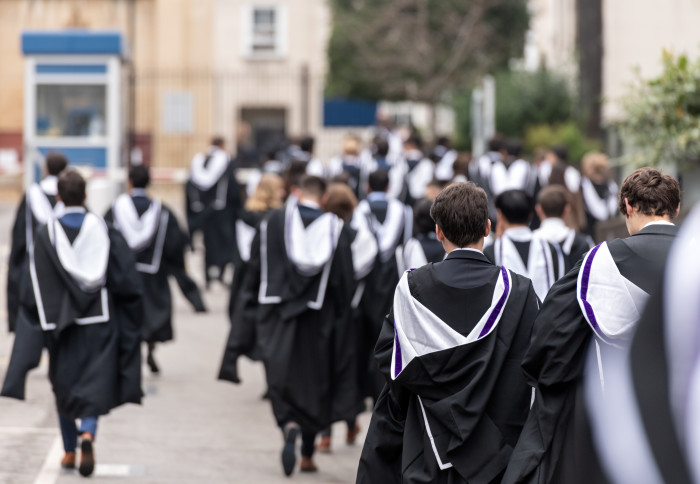 More than 3,000 students will graduate today in three ceremonies at the Royal Albert Hall.

The ceremonies mark the achievements of Imperial’s postgraduate students who completed their courses between March 2021 and March 2022.

For the first time since the pandemic began, friends and family of graduates will be able to attend ceremonies and post-ceremony receptions. All three ceremonies will also be streamed live for those unable to attend.

Addressing the graduates, Provost, Professor Ian Walmsley said: “I want to salute our graduates for your success. Congratulations. You have worked hard for this momentous occasion and you have earned these celebrations today.

“Any degree is a great achievement, but you came to this one after going through extraordinary circumstances: the last two years have been exceptional, unprecedented and unforeseen.”

More information on the ceremonies can be found in the College’s Graduation FAQs.

Five honorary degrees will be awarded as part of the graduation ceremonies.

Sir Samuel E. Jonah is Executive Chairman of Jonah Capital and Chancellor of the University of Cape Coast, Ghana. Sir Samuel earned a master’s degree in mining management from Imperial Oil in 1979 before joining Ashanti Goldfields Corporation. He became CEO of the company in 1986 and is credited with overseeing its growth from a single mine operation to a multinational enterprise.

Dervilla Mitchell is Vice President of Arup. Dervilla is an eminent structural engineer who leads major projects around the world. She was lead design engineer for Heathrow Terminal 5 in London, Europe’s largest construction site at the time, and led the Portcullis House project in Westminster, as well as Arup’s contribution to the Athletes’ Village. London Olympics.

Professor Sir Peter Knight is a senior research scientist in Imperial’s Department of Physics. Sir Peter is renowned for his pioneering research in quantum optics. As Dean of the Faculty of Natural Sciences and later as Vice-Rector (Research), Sir Peter was responsible for determining research priorities, new programs and initiatives for the College, including those that led to the creation from the Grantham Institute for Climate Change and the Institute for Shock Physics.

Professor Sir John Savill is Regius Professor of Medical Science at the Queen’s Medical Research Institute, University of Edinburgh. He is one of the UK’s leading clinical academics, internationally recognized for his research in apoptosis and immunology. He has made many profound contributions to medical research and clinical training, which was recognized when he was appointed Chief Scientist for the Scottish Government’s Health Directorates in 2008.

Dame Kate Bingham is managing partner at SV Health Investors and former chair of the UK COVID-19 Vaccine Task Force. She co-leads the SV Biotech Franchise, which builds high-value companies that develop transformational new medicines from discovery to commercialization. Dame Kate also sits on the board of the Francis Crick Institute and has been a member of Imperial’s Business School Advisory Board for several years, a role in which she judges the WE Innovate Awards.

Eight Imperial College Medals will be awarded at the graduation ceremony. Medals are awarded to members of the Imperial Community for meritorious or commendable service to the College.

Professor Maggie Dallman OBE is Vice President (International), Associate Vice President (Academic Partnerships) and Professor of Immunology at Imperial. Professor Dallman is a world leader in research aimed at understanding how inappropriate immunity and inflammation lead to the development of chronic inflammatory diseases. She directs the Dallman Lab, is Director and Trustee of the Francis Crick Institute and has served on the UK Biotechnology and Biological Sciences Research Council.

Professor Alison McGregor is Professor of Musculoskeletal Biodynamics in Imperial’s Department of Surgery and Cancer and Director of Undergraduate Science in the Faculty of Medicine. She is a world-renowned researcher on the mechanisms, effects and management of injury. This work has had a great impact on the performance of elite athletes, including his rowing performance research which contributed to the success of Team GB at the London 2012 Olympics.

Joanna is a department head at Imperial’s School of Medicine. She joined the College in 1994 and has worked in several departments of the faculty, holding her first position as Department Head for Neuroscience in 2009. She then became Division Head for Immunology and Inflammation and in 2019 she joined the new department. metabolism, digestion and reproduction. In this current role, she oversees the running of all operations and facilities for various research groups that were previously in other departments.

Dr Benita Cox is Senior Faculty Tutor and Program Director for the Masters in International Health Management program at Imperial College Business School. Dr. Cox’s research focuses on the role of information systems in health care delivery, particularly the impact of information and communication technologies on health care practice. She has published extensively in this area and consulted extensively in a number of industries, including pharmaceuticals.

Jon Hancock served as Head of Imperial’s Central Secretariat until his retirement in 2019. He was an outstanding servant to the College for 20 years. In his role, Jon had primary responsibility for the College’s governance arrangements. In addition to providing highly professional service to Council and its committees, he was the custodian of the College’s governance documents.

Nick Moakes is Chief Investment Officer at Wellcome Trust, where he is responsible for a £38billion global portfolio that funds the Trust’s mission to solve the pressing health issues facing everyone. He has lent his expertise to Imperial College London Endowment Board for over a decade. For the past few years, Nick has guided the Board of Directors as Chairman, during which time he modernized the staffing for a strong future.

Prior to his retirement in 2021, Professor Nelson Phillips was Professor of Innovation and Strategy, Co-Director of the Center for Responsible Leadership and Associate Dean for External Relations at Imperial College Business School. Professor Phillips is a distinguished scholar who has made essential contributions to the growth of the business school. His research focuses on understanding the evolution of institutions, entrepreneurship in emerging markets, and the impact of technology on strategy and innovation.

Jon Tucker was Director of Faculty Operations at Imperial College Business School for 13 years until his retirement in February 2022. Mr Tucker was instrumental in transforming the scale and ambition of business school since his appointment in early 2009. Prior to that he held various senior positions at Lloyds Bank and later at the Science Museum London.