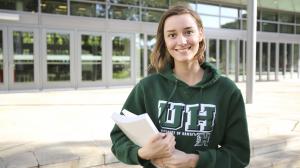 Mānoa: UH Mānoa in the world’s top 1% for academic and research excellence

​Link to the video of UH Mānoa broll: https://bit.ly/2LKfs2b

A recently announced academic and research ranking places University of Hawaii at Mānoa in the top 1% of all universities in the world. The 2021 Aggregated ranking of the best universities (ARTU), published on January 18, combines three of the world’s most influential rankings to form its ranking.

UH’s flagship campus ranked #66 in the United States and #259 in the world out of more than 26,000 colleges and universities worldwide. ARTU combines the rankings of UH Mānoa by Times Higher Education, Quacquarelli Symonds and Academic Ranking of World Universities.

ARTU, now in its third year, was established by the University of New South Wales. Rankings of over 2,000 universities were analyzed for ARTU’s 2021 update, which identified the top 400 global universities.

“UH Mānoa is consistently recognized as one of the top research universities in the world. This global ranking confirms our position in a very strong and public way, and reflects the continued remarkable achievements of our faculty, staff and students,” UH Mānoa Provost Michael Bruno noted.