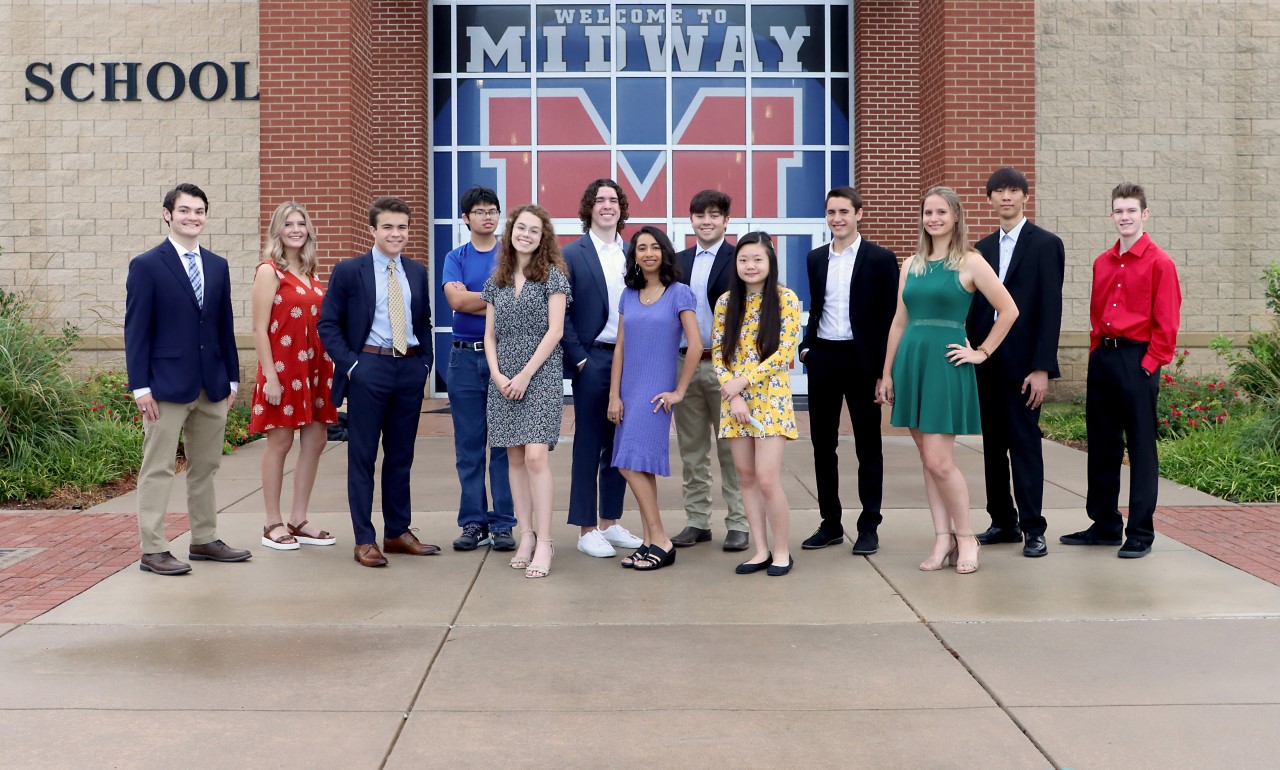 HEWITT, Texas – Students at Midway High School continued their legacy of excellence in standardized testing this year, with 13 seniors recognized through the National Merit Program.

One of these students, Michael becker, was named a semi-finalist of national merit. The finalists will be announced in February 2022. Becker ranked among the top 1% of top high school students in the country on the PSAT / NMSQT.

Michael is the son of Mike and Amy Becker, of Hewitt. He is an AP Fellow with Distinction and recipient of the Spirit of Midway Award for his volunteer service. Michael is vice-president of the Student Council, is a member of FCA and the National Honor Society, and participates in UIL Science. He is also a member of the Antioch Community Church Youth Group and a volunteer at the Hewitt Public Library. After graduation, Michael plans to attend Texas A&M University to major in engineering.

Ashlyn Melichar is recognized both for her success as a National Merit Fellow and for achieving a perfect score on ACT.

Ashlyn is the daughter of Ken and Cameo Melichar from Hewitt. In addition to her perfect ACT score, she is also an AP scholar with distinction. Ashlyn received a top rating on a Class 1 vocal solo in the UIL State Solo and Ensemble competition and has been a member of the choir for three years. She is also treasurer of HOSA and participates in UIL Science. Outside of school, she is a youth delegate to the Central Texas Soccer Referee Association board of directors and college football referee, takes guitar and singing lessons, and is a member of the Central United Methodist Church. Ashlyn plans to attend A&M or the University of Texas to study biomedical engineering as an undergraduate and hopes to complete a doctorate related to medical research.

Other National Merit Scholars recommended by Midway are:

Sasha barrera is the daughter of Janet and Mark Barrera of Robinson. Sasha attended the American Overseas School of Rome from grades 9 to 11. She is an AP Scholar with Distinction, winner of her School Talent Show in 2019, and was named College Athlete of the Year in 2020 and 2021. She captained her women’s track team for three years and ran the cross country. during two years. Sasha is also a member of the Global Issues Network, the National Honor Society, the Italian Honor Society, and the Meistersingers Varsity Choir. Outside of school, she enjoys college cheerleading and music as a talented singer and guitarist. After graduation, Sasha plans to pursue studies in the social sciences at a university.

Battle of Sam is the son of Drs. Jake and Soo Battle of Waco. Sam is a National Honor Society Fellow, AP Fellow with Honor, 2-year Varsity Football Team Captain and Letterer, and a 3-year Spirit of Midway Award recipient for Volunteerism. Outside of school, Sam is involved in Teen Leadership Waco and is a member of the First Methodist Church of Waco. He regularly volunteers at the Advocacy Center and other local nonprofit organizations in the community. After graduation, Sam plans to attend the University of Texas as part of the Plan II honors program.

Ava clevenger is the daughter of Josh and Lisa Clevenger of McGregor. Ava is a member of the National Honor Society and the Midway High School Chamber Singers. She is also involved in the art program, is a gold and silver medalist in the national Spanish exams and an AP scholar with distinction. Ava has secured a spot in the TMEA region choir for the past 3 years and received a top rating on her State UIL Solo. As an active volunteer in the local community, she is a recipient of the Spirit of Midway Award for four years, has been a member of the Waco Chapter of the National Charity League since 2016, and is co-chair of her NCL class this year. Ava was also a Waco Symphony Belle last year and is a member of the youth community at St. Paul’s Episcopal Church, serving as a sidekick on some Sundays. After graduation, she plans to continue her studies in psychology and religion.

Inoo Jo is the son of Hwasun and Jangho Jo of Hewitt. Inoo has been a member of the Computer Science Club for four years as well as a member of the National Honor Society. He participates in many academic competitions including UIL Math, UIL Computer Science and Debate. Inoo also participates in the Air Force Association’s CyberPatriot competition and outside of school he performs in the Waco Symphony Youth Orchestra.

Evan jones is the son of Stephen and Karen Jones. As a member of the symphony orchestra, Evan participates in UIL Solo and Ensemble and got a combination of 1 and 2 for his performances. He also did All-Region in Piano in 2019 and 2020 as well as All-Region in Bass in 2020. In addition, Evan is a member of the National Honor Society and he participates in Academic UIL, winning first place in Science and second place in Mathematics and Number Sense in the District in 2020. After graduation, Evan plans to attend the University of Texas at Austin or Texas A&M University for a chemical engineering degree.

Drew kedersha is the son of Scott and Kristen Kedersha of Waco. He is a member of the Midway High School Meistersingers, Chamber Singers, Cross Country Team, Blue Crew, National Honor Society and the Musical. Prior to moving to Midway the summer before his junior year, Drew participated in soccer, track and field, varsity choir, cross country, and show choir. Outside of school, Drew is involved with the Harris Creek Baptist Church Youth Group where he serves as a worship leader and as a member of the student leadership team. His leadership roles in high school have included cross-country captain, choir vice-president, and second-year student government class representative. Drew is an AP Fellow with Distinction, a TMEA Texas Music Fellow, and has received several Outstanding Solo Awards. Drew’s future plans include college to major in commercial music or computer science, or a combination of the two.

Heidi kuang is the daughter of Weidong Kuang and Lora Tu of Woodway. Heidi excels in both academics and athletics as a member of the swim team and the National Honor Society. She has also won numerous academic awards, including being named Gold Medalist in the National Spanish Exam and AP Fellow with Distinction. After graduation, Heidi plans to continue her studies in computer science.

Caleb Lively is the son of Lauren and Michael Lively of McGregor. Caleb is a member of the National Honor Society and is an honorable mention in the German national exam. He was also a guest at the Envision Aerospace and Aviation Academy at Rice University. Caleb is the captain of one of Midway’s robotics teams, and outside of school he volunteers with Habitat for Humanity. Caleb hopes to attend Colorado School of Mines where he will study engineering.

Carson lutz is the son of Lori Lutz from Waco. Carson is the Texas Association of Music Teachers State Finalist in the Piano Performance Competition, UIL’s Third State Medalist in Literary Criticism, and Gold on the National Spanish Exam. He is the Drum Major of Midway Band Head, President of the National Honor Society and Co-President of the Spanish Club, and is a member of UIL’s Literary Criticism and Spelling and Vocabulary Teams. Carson is also an AP Fellow with Distinction, Spirit of Midway Award recipient, and student council member. In the community, Carson is involved in the Young Men’s Service League of which he was the former president. He is also a piano student of Dr Brian Marks and Dr Jani Parsons and a music theory student of Dr Amy Fleming. After graduation, Carson hopes to attend Yale University and major in political science and / or music.

Piya Patel is the daughter of Priti and Vikas Patel from Waco. Piya is a member of the National Honor Society and online editor of the Panther Post. She is also active in the community and has completed a marketing internship with Digital Media Butterfly in addition to volunteering to teach creative writing at the Hewitt Public Library. After graduation, Piya plans to attend Rice, UT Austin, or Baylor to study business and marketing as well as writing and literature.

Matthew Shirley is the son of Doyle and Ann Shirley of McGregor. Matthew is a recipient of the Spirit of Midway Award for Volunteer Achievement and a Fellow of the National Honor Society. He participates in UIL university courses in science and mathematics and also participates in robotics. In the community, Matthew is a volunteer basketball coach. His plans after graduation are to go to Columbia University or Washington University in St. Louis to study architecture.