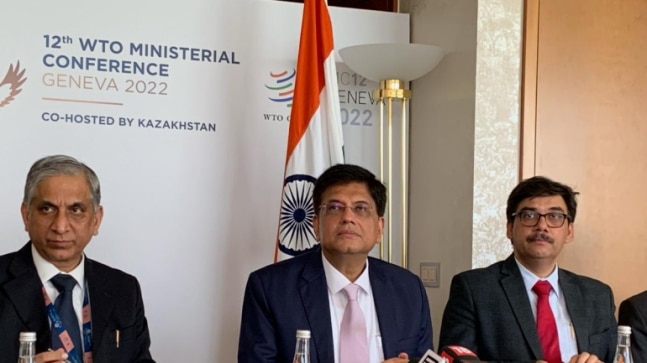 Bolstered by statements by Pope Francis that equitable access to safe and effective vaccines is key to saving lives and livelihoods, Indian Trade and Industry Minister Piyush Goyal on Sunday lashed out at the countries and big pharma who oppose intellectual property rights (IPR) waivers on Covid vaccines. , drugs and equipment.

In a tweet tagging the World Trade Organization, Pope Francis said Africa should not be left behind.

Equitable access to safe and effective vaccines is fundamental to saving lives and livelihoods. Africa should not be left out. No one is safe until everyone is safe. @WTO #MC12

Goyal, in a hard-hitting statement, said: “Some for-profit pharmaceutical companies and some countries, to ensure profits for these companies, deny the poor the right to be vaccinated. They have made profits a priority.”

He said that in addition to high death tolls and misery, the pandemic had thrown economies into disarray.

“The stance taken by many nations is shocking as they refuse to help the poor. Greed sets the world back in time,” he added.

Goyal explained that some developed countries have already given 2-3 doses to their entire population, while many poor countries are still struggling to get the first ones.

Goyal was referring to the fact that in the third year of this pandemic, only 14% of people in low-income countries have been vaccinated even once, while the People’s Vaccine Alliance reported in November last year that Pfizer, BioNTech and Moderna, the companies behind two of the most successful Covid-19 vaccines, were earning $65,000 per minute.

Additionally, pharmaceutical behemoths like Pfizer and BioNTech had delivered less than 1% of their total vaccine supply to low-income countries, while Moderna had only delivered 0.2%.

Meanwhile, Piyush Goyal has met with South African Minister Abraham Patel and US Trade Representative Katherine Tai to drum up support for the info-South Africa proposal.

Apart from the need to expand manufacturing and administration of covid vaccines, he discussed India’s stance on food security, fisheries subsidies and WTO reforms among others.

Interestingly, the WTO meeting is being held at its headquarters in Geneva, despite the fact that the host country, Switzerland, is one of the nations opposing the proposal.

In November 2020, India and South Africa submitted a request for a waiver of the TRIPS Agreement, proposing that the Agreement on Trade-Related Aspects of Intellectual Property Rights (TRIPS) be (largely party) suspended during the Covid-19 pandemic.

Countries like Switzerland have argued that in addition to patent rights, this will affect other intellectual property rights such as designs, trade secrets and copyright, as well as anything related to the pandemic, including not only vaccines and drugs, but also drugs. such as tests and ventilators.

The Swiss say suspending the established international legal framework would mean that WTO rules, which have been in place for more than 25 years and have been accepted by 164 countries, would no longer apply.

Countries like India believe that the pharmaceutical giants and their parent countries want to undermine the spirit of the proposal, which is why there is opposition to the project, which is expected to be discussed over the next two days at the 12th WTO ministerial conference in Geneva.

Negotiators in Geneva had finalized their work on June 10 on two draft texts outlining a WTO response to the Covid-19 pandemic, including an intellectual property (IP) response for consideration and possible approval.

The draft text on the WTO’s response to the pandemic sets out a series of trade-related commitments and objectives to support increased resilience in the face of Covid-19 and future pandemics. These include general provisions as well as specific provisions relating to trade facilitation, regulatory cooperation, intellectual property, services, food safety and future work aspects.

India, since the arrival of the domestic vaccine, has sent doses to 150 countries.