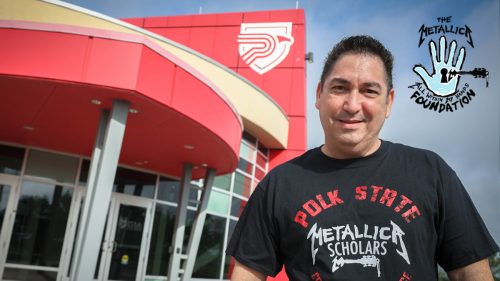 As a musician, Noel Rosa’s resume speaks for itself, but there have been many trials and tribulations along the way. Rosa, 55, of Lakeland, takes great pride in finding solutions to her own problems.

This time he got help from a non-profit organization founded by another group of well-known musicians. Through Metallica’s All Within My Hands Foundation, in partnership with the American Association of Community Colleges, Rosa receives valuable training in CNC machining at Polk State College free of charge. His new skills will greatly help his guitar company, New Sound Acoustics.

“It was incredible help at a time when I needed it most,” he said. “I am so grateful for this opportunity because I could never have afforded to take this course without the Metallica scholarship. The fact that they are doing this is absolutely amazing.

All Within My Hands aims to build sustainable communities by supporting workforce education, hunger relief and other essential local services. The Polk State Corporate College CNC Machining program is a high-intensity, eight-week course that prepares students for in-demand, high-paying careers and is supported by the Metallica Scholars initiative.

“I could see a person who really wants to excel and improve and they can’t afford to do that,” Rosa said. “To be able to receive this grant to take a course like this that will enrich their lives with a better salary and with a set of skills that they did not have before; now it’s life changing.

“It doesn’t just change the life of the person, but it changes the life of their children, their family, their community,” he added. “The impact this has on a large ripple scale is absolutely amazing. Props and thanks to Metallica and their…foundation for making such a great thing.

Rosa’s passion for music goes back as far as he can remember. His family members remember him dancing on the radio when he was young. His first drum set came at age 5 and featured Snoopy from Charles Schulz’s comic strip, “Peanuts”.

For more than 30 years, Rosa has been touring and performing in musical shows. A man of Christian faith, Rosa has opened for Switchfoot and Eddie Money as well as other well-known contemporary Christian bands such as DC Talk and Audio Adrenaline.

Born in the projects of northern New Jersey, Rosa’s musical career began in church. By the age of 8, he was playing for local churches. Rosa was signed to CBS Records shortly after high school.

“I had two absolutely amazing parents,” Rosa said. “You couldn’t ask for better parents than my parents.

“I grew up basically in the church environment, surrounded by a strong – very loving – community,” he added. “Really, that’s where my music blossomed.”

In the 1990s, an injury from a car accident limited Rosa’s ability to play the drums. To avoid having to give up or take an extended break from music, a fellow musician urged Rosa to learn to play the guitar. Four years later, he won his first prize as a guitarist.

Following a performance in 2009, Rosa’s ability to play the guitar was also in jeopardy after a large piece of equipment fell on her. The accident caused Rosa severe back pain. Thanks to its new fight against adversity, New Sound Acoustics was born.

“I couldn’t find a guitar that was light enough that I didn’t mind performing on stage, so basically I did a worldwide search and wasn’t happy with anything I found, so I designed my own guitar,” he said. “I toured with it and said, ‘I’ll never tour with another guitar again.’ It’s the best sound-wise and it weighs only three pounds.

New Sound Acoustics manufactures custom lightweight acoustic guitars. With her arms and shoulders unable to support the weight of a typical guitar, Rosa’s creation allowed her to continue performing and touring. He soon learned that his creation had market demand.

Originally, Rosa thought his target audience would be millennials, as he marketed his product as the next generation guitar. Soon after, he learned that older musicians suffering from bumps, bruises, aches and pains saw his product as a remedy to keep playing while limiting stress on the body.

“While I was on tour, other professional artists started asking me for these guitars and the entrepreneurial light bulb went out,” he said.

In 2016, Rosa’s career hit another hurdle. While on tour, Rosa found herself struggling with feelings of great fatigue. Shortly after, he was diagnosed with stage 4 cancer and was forced to stop filming for a year.

“When I was diagnosed, I said, ‘How soon can we get rid of this thing and treat it?’ “, he recalls.

Divorced father of three – Gavin, 22, Megan, 16, and Grayson, 5 – Rosa’s cancer is currently in remission. When Rosa arrived at Polk State to begin the eight-week program, he still had to take oxygen. Rosa said he was grateful for the understanding of fellow students, staff and Professor James Gibbons – better known as “Mr. Gib” – were of his situation.

“The staff here are absolutely amazing,” Rosa said. “I was blown away by how kind Jamie (Rowan), the program director, and ‘Gibb’, my teacher, were and were so accommodating. They took all the fear away.

Lessons learned and what comes next

Since starting her business in 2009, Rosa has sold thousands of custom guitars. The designs are his own, but so far he has had to outsource the manufacturing. Once the program is complete, Rosa will be able to do the work that he currently contracts out himself.

“The course was absolutely amazing,” he said. “It will save my business thousands of dollars.”

Rosa works from the Lakeland-based incubator called Catapult. He looks forward to the day when he can produce guitars with the machines he once had to pay to run.

The Maker Space, where guitars are made at Catapult, opened in July 2021. Catapult President Christin Strawbridge is excited about what the CNC program is accomplishing.

“What we’re seeing is that there’s a real labor demand for people using these types of machines,” she said. “For Polk State, working to meet that demand is truly a wonderful thing.”

Rosa said he appreciates how nice the machines are on campus and the tutelage his professor gives. Gibbons, Rosa said, teaches according to the books, but has four decades of real-world experience explaining how concepts translate to the workforce.

“My favorite thing about this class is the way my teacher teaches it,” Rosa said. “He walks us through the formulas, the math and why it’s important that everything lines up perfectly.”

Besides touring and designing guitars, Rosa also enjoys teaching and trying to inspire others. He conducts guitar clinics and workshops at high schools, colleges and other local venues. Rosa also uses these opportunities to talk motivation and share her story.

“I like to keep busy, but I make sure to manage my time and spend time with my kids and my family and balance the things that I have to do professionally,” he said.

Rosa is expected to graduate in early May.

“What I plan to do after I graduate is develop New Sound Acoustics, start working with a new producer on a new album, start touring again,” he said. “My goal is to grow my guitar business and there are also other products in the music industry that I have patents for and want to produce.”

Over the past 13 years, Rosa has sold thousands of custom guitars to musicians around the world. He hopes that the legendary group that gave him this opportunity will have the chance to use his flagship product.

“I want Metallica to play my guitars,” Rosa said. “Absolutely.”

The next class of Polk State Metallica Scholars will begin on August 8. More information is available at www.polk.edu/metallica.