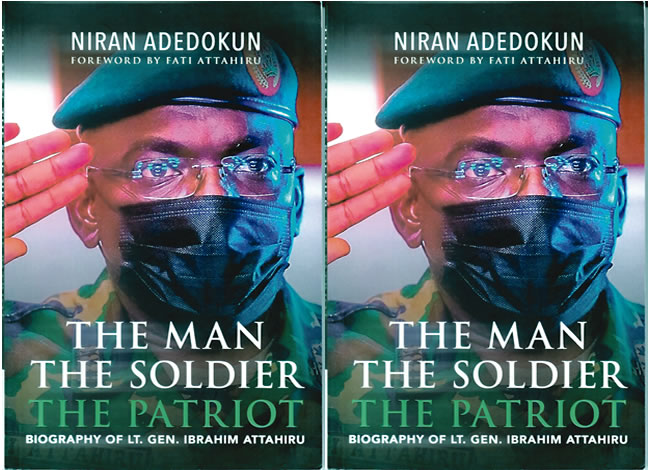 Portrait of an intellectual soldier

A review of “The Man, The Soldier, The Patriot” by Niran Adedokun by AKINTAYO ABODUNRIN. Cable books; 2022.

PEOPLE have different ways of rationalizing death and consoling the bereaved, especially if the deceased person died young. ‘Igit’o to ki pe ni ‘gbo’, meaning straight trees do not last in the forest, is one of the common Yoruba sayings to explain untimely demise. Right trees, they say, are usually the first to be felled for human use, and that like them, good people also do not last.

This appears to be the case with the late army chief of staff, Lt. Gen. Ibrahim Attahiru, who spent just 114 days in the post before his death in a plane crash alongside 10 other officers. and men of the Nigerian Armed Forces on May 21, 2021. He was appointed Chief of Army on January 26, 2021. He had begun to introduce impactful changes which analysts say would have turned the tide of the Nigerian Army, by particularly in tackling the Boko Haram insurgency, before his death.

His disappearance, along with others caused by “bad weather” as the plane landed at Kaduna International Airport, shocked Nigerians and the international community. It was followed by an outpouring of grief, with mourners attesting to Attahiru’s excellent qualities. He was settling into office and had expressed his vision for the recovery of the Nigerian military. Sadly, death only allowed him to touch the tip of his plans as most Nigerians are still in the dark about the man and his background.

Public relations practitioner, lawyer, and writer Niran Adedokun breaks down the man’s mystique in a biography titled “The Man, The Soldier, The Patriot.” In the 168-page book published earlier this year by Cable Books, Adedokun, a newspaper columnist, gives an authentic portrait of Attahiru’s life. It painstakingly reconstructs the life and final moments of the soldier with information carefully gathered from family, friends and associates. The book, produced alongside a documentary by the General Ibrahim Attahiru Foundation (GIAF) to commemorate the first anniversary of his passing, shines a light on the life and achievements of the late COAS.

Thanks to Adedokun’s sleek portrayal, we know the man born August 10, 1966 in Doka, Kaduna, who spent 35 years in the military, was focused and committed. He was an intellectual soldier who served his nation diligently and with all his might. There were no half measures with Attahiru when it came to Nigeria; he gave his all to the country in his appointments; staff, instruction or command. He also walked on toes for the greater good and prosperity of Nigeria. The man who lost his parents early in life and was raised by a neighbor was a soldier who encouraged his subordinates to read. Attahiru also appreciated the importance of cooperation between all arms of the army, striving to reduce inter-service rivalry, first as theater commander of “Operation Lafiya Dole” and later as than COAS.

Well-written and produced, “The Man, The Soldier, The Patriot” comprises five chapters, an epilogue, a postscript and tributes from Nigerians and the international community mourning the death of a hardworking professional.

There is also a foreword by his widow, Fati, where she writes about the pain of his untimely demise and how her family’s love for him endures. “Our love for Ibrahim is something that death can never take away from us. He will never leave us; he will always be near us, even though he is unseen and unheard of, through the fond memories we have, some of which are documented in this book, as they continue to shine in our hearts into eternity where we hope to see each other again”, affirms the wife who gave him three children.

The first chapter, “Taking the Mantle”, is about the start of Attahiru’s career in the military in 1984 when he was admitted to the Nigerian Defense Academy. He also looks back on his roots, his early orphanage and his life at Rimi College. The second chapter is about his orders, while the third is about his meeting and marrying Fati. Chapter four is about his time, accomplishments, and perceived failure as theater commander of Operation Lafiya Dole, which he later renamed to Operation Zamani Lafiya. The latest, ‘All the Way Up’, is about his rise to the top of the Nigerian Army with various command posts and eventually Chief of Army Staff.

The book also contains tributes from President Muhammadu Buhari, state governors, diplomats, classmates and professional colleagues of the intellectual soldier pursuing a doctorate before his death.

Adedokun captured Attahiru’s life perfectly with “The Man, The Soldier, The Patriot”. His decision not to use a linear narrative style but a portrait is masterful. He affirms his rating as a stylist of prose. Although Attahiru’s right tree in the forest did not last long, Adedokun assured that he will live forever with this well-written biography.

One month after the start of the academic session, the school is not yet open