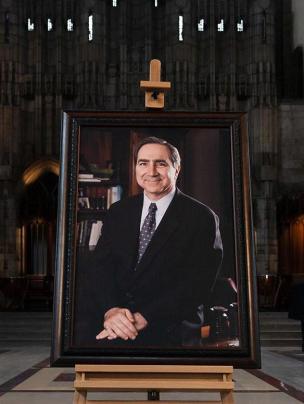 Remembering the vision and kindness of Hugo Sonnenschein as a leader and scholar of UChicago | Kenneth C. Griffin Department of Economics

Colleagues, friends and family share memories of the 11th president at the April 30 memorial service

Leaders and colleagues from the University of Chicago joined friends and family of the late Hugo Sonnenschein this past weekend to honor the University’s 11th President, share warm personal memories, and reflect on his profound impact as a leader, economist and mentor.

Sonnenschein, who led the University through transformative change during his tenure from 1993 to 2000, died on July 15, 2021 at the age of 80. as well as personal kindness as a colleague and friend.

“Along the arc of any university, each president plays an important role in helping the institution and the community that composes it to evolve and grow,” said President Paul Alivisatos. “Often it is only over time that the magnitude of the impact of such changes can be fully understood and appreciated.”

Alivisatos noted that the foundational work Sonnenschein did laid the foundation for the College’s remarkable transformation. “Of course, not everyone agreed with Hugo on his ideas – and it wouldn’t be the University of Chicago if they did. But I think we can all agree that his ideas have stood the test of time,” Alivisatos said.

Chancellor and President Emeritus Robert J. Zimmer said Sonnenschein was able to create lasting impact through an independence of perspective and questioning, which he applied equally whether he was solving an economic problem or runs the university.

“His focus on thinking about the right questions and the right way to approach them was very powerful,” Zimmer said. “He was deeply attached to that. This made him an important and impactful leader.

As president, Sonnenschein enacted a series of changes to strengthen the University, including increasing the size of the College while maintaining the strength of UChicago’s renowned graduate programs. He also spearheaded improvements in the quality of student life and commissioned the first comprehensive campus planning process in 30 years.

His focus on thinking about the right questions and the right way to approach them was very powerful.

Joseph Neubauer, Chairman of the University’s Board of Trustees, remembered Sonnenschein’s innovative and broad thinking and his “indomitable drive to get things done”.

“I still remember him saying at several board meetings, ‘When your friends and family call out to you for help getting their kids to UChicago, then you know we’ve really arrived,'” said Neubauer “Well, I’m happy to report that we have achieved and exceeded your vision and mission.”

Steven Poskanzer, Sonnenschein’s former chief of staff, said his mentor never stopped being a teacher, even when he became a university leader. “Only the nature of his class and his students has changed. Working alongside Hugo, watching him, was like being Hugo’s doctoral student in college leadership,” said Poskanzer, who later served as president of SUNY at New Paltz and Carleton College.

“He was the best and most caring mentor, who changed my life for the better and was a pillar of joy and friendship for me and my family,” Poskanzer added. “Not every president of UChicago, you know, will personally deliver the Medici pizza to your house.”

Poskanzer was not the only one to remember Sonnenschein’s thoughtfulness. Geoffrey Stone, Edward H. Levi Emeritus Service Law Professor at UChicago, described Sonnenschein as “the right person, at the right time, in the right place.” Sonnenschein not only wondered how he could add value to an institution, but he did so without the self-interest of limiting his own risk. On the contrary, he placed the interest of the University above that of his own ego.

Stone, whom Sonnenschein recruited to serve as provost at UChicago, recalled how the president opted against the tradition of going to the convocation ceremony last and by himself. Instead, he gently took Stone’s arm, pulled him back, and said, “Walk with me.”

“I’m proud to say that I have since done it and will continue to do so for the rest of my life,” Stone said.

Sonnenschein’s impact also extended far beyond the university and its Hyde Park campus. Renowned economists Andreu Mas-Colell – founder of the Barcelona School of Economics and professor at the Universitat Pompeu Fabra in Spain – and Richard Kihlstrom of the Wharton School at the University of Pennsylvania have both spoken of their late colleague and friend as with a generous spirit that treated his students as colleagues and helped, even from afar.

The public memorial came after a two-day conference the Becker Friedman Institute of Economics convened to honor Sonnenschein. A member of the academic community for nearly three decades, he most recently served as Charles L. Hutchinson Distinguished Service Professor Emeritus in the Kenneth C. Griffin Department of Economics.

His daughters, in a joint statement, said their father’s greatest fortune was attending the University of Rochester and meeting their mother. They talked about his unconditional love and how he taught them the importance of honesty and curiosity as well as how to parallel park, right an overturned canoe and build a fire and to clean.

Addressing his grandchildren, they concluded: “He loved you. You stretched him, and he enjoyed the stretch. He lives in you.

Read the original story at news.uchicago.edu.