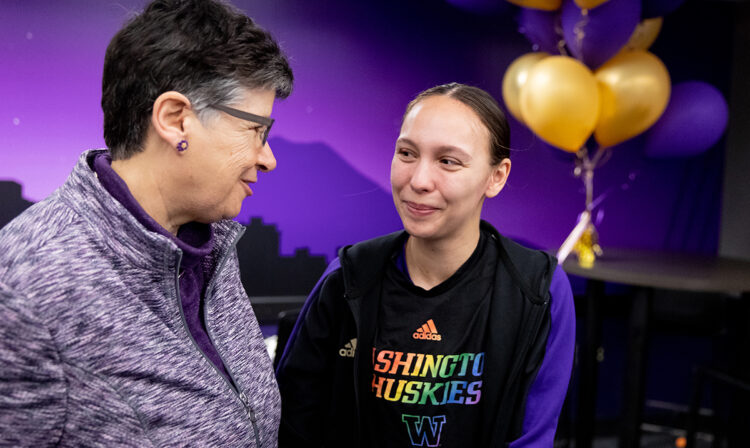 UW junior Rosalie Fish has been selected as a Truman Scholar. On Friday, UW President Ana Mari Cauce shared the news with Fish.University of Washington

University of Washington Junior Rosalie Fish was shortlisted for the prestigious Truman Scholarship, the third consecutive year that UW students have been honored with this national award.

A very competitive award, only 58 students were selected nationally this year from over 705 applications. the Truman Fellowship recognizes future leaders who are motivated to effect system-level change. Students are selected on the basis of their leadership skills, demonstrated civic engagement, academic potential, and desire to pursue a career in public service. Scholars receive up to $30,000 for graduate education, mentorship, and additional benefits to help prepare them for careers where they can make an impact.

“We are very proud to see Rosalie’s outstanding leadership and advocacy work recognized by the Truman Foundation,” said UW President Ana Mari Cauce. “In the classroom, in her community, and on the trail, she helps raise awareness for the plight of missing and murdered Indigenous people, and we know she will continue to do great things with the support of this scholarship.

Learn more about Rosalie and watch a video of President Cauce telling her she was selected as a Truman Scholar here.

Fish, of Auburn, Wash., is a social welfare specialist at the School of Social Work and participates in UW’s track and field and cross country programs. She ran a mile in 5 minutes 2.51 seconds, the 1,500 meters in 4 minutes 40 seconds and the 5 km in 17 minutes 49.91 seconds. A member of the Cowlitz Tribe and descendant of the Muckleshoot Tribe, Fish dedicates her runs to missing and murdered Native women and gained national attention by painting a red handprint on her face and the letters “MMIW” on her leg during the competition.

“Being selected for the Truman Fellowship sends a message to Indigenous peoples around the world that we belong in the social service profession. We have the power to act as leaders, world changers and in positions of influence – despite the adversities and systemic obstacles we face,” Fish said. “With this opportunity, I will continue to dedicate my life to Indigenous communities and disrupt the cycles of victimization that our people face. This means advocating for accessible housing, tribal sovereignty, environmental justice and universal health care. I will incorporate Indigenous voices and perspectives into policies that impact social well-being.

She transferred to UW from Iowa Central Community College where she also competed in track and cross country, serving as a member of the National Junior College Athletic Association’s Student-Athlete Council. In addition to painting her face, she championed Indigenous rights on and off the track. She plans to continue her advocacy by pursuing a master’s degree in social work and a graduate certificate in Native American studies.

“Rosalie is committed to using her platform as a student-athlete to be a leader and create change. We celebrate her courage and are thrilled to continue supporting her advocacy efforts,” said the athletic director of the ‘UW, Jennifer Cohen.

Dean of the School of Social Work, Edwina Uehara, added that she admires Fish for combining her college education and love for running with her passion for advancing knowledge about the plight of missing Indigenous women and murdered.

“We are proud of Rosalie’s leadership and commitment to raising the profile of this devastating issue and honored that she specializes in social welfare,” Uehara said.

Established by Congress in 1975 as a memorial to President Harry S. Truman and a national monument to public service, the Truman Fellowship carries the legacy of the 33rd President of the United States by supporting and inspiring the next generation of leaders in the public service.

When approached by a bipartisan group of admirers near the end of his life, Truman petitioned Congress to create a living memorial dedicated to the purpose, rather than a traditional brick-and-mortar monument. For more than 40 years, the Truman Foundation has fulfilled its mission to inspire and support Americans of diverse backgrounds in public service.

This year’s 58 winners join a community of 3,442 Truman Scholars named since the first awards in 1977. Fish is the 18th UW student to receive a Truman Fellowship since the award’s inception, according to the Truman Foundation.