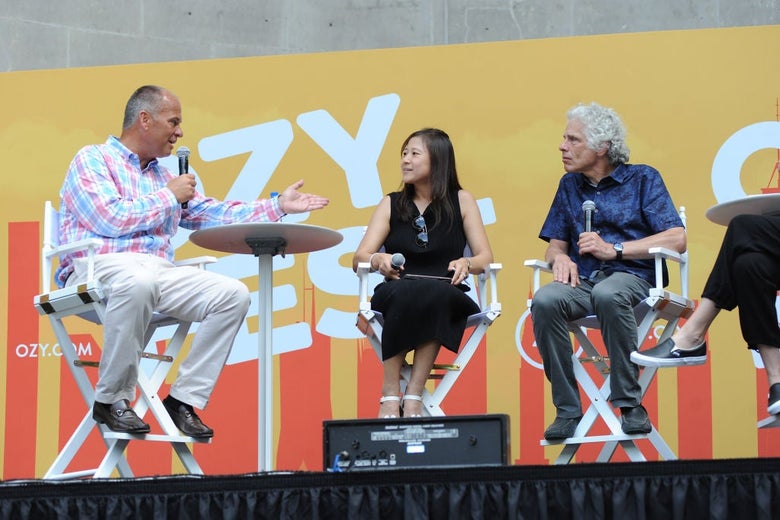 Story time! Around 1999, your pen pal (me) was in college and went to see a linguist named Steven Pinker speak. His talk was about linguistics and evolution (I think). It was very interesting and Pinker seemed to your pen pal (me – the pen pal is always me) like the smartest person in the world, especially for the way he immediately responded to questions from the audience on mostly random topics with complete answers and loaded with examples. But it has apparently been a descent for him intellectually since, if this excerpt from a New York Times review of his new book Rationality is an indication:

“Yet Pinker is troubled by what he sees as a problem with the image of rationality. “Rationality is not cool,” he laments. It is not considered “dope, phat, chill, fly, sick or da bomb.” »Https://t.co/meHf3nSSXj

The words written by Pinke r in a published book, to be clear, are: “Rationality is not cool,” then shortly thereafter, referring to a slogan on a mosaic near his home, “Although I cannot argue that reason is dope, phat, chill, fly, sick or bomb, and strictly speaking I cannot even justify or rationalize reason, I will defend the message on the mosaic: we must follow reason .Wow! It’s funny, because we were just talking about the 1990s, and that bag of slang would have been squeaky even then.

There is a lesson here. Well, there are two. The first lesson is just “no”. The second is about what happens to you when you go from being a true public intellectual – an intelligent, learned person who writes books and speaks in public on complicated matters in a way laymen can understand – to one. public intellectual, who is someone who makes paid speeches and panel appearances for a business-oriented upper and upper middle class audience. (Pinker is pictured above at Ozy Fest, a celebration of upward mobility through panel discussions hosted by a media startup that could, according to a new detailed and hilarious New York Times report, be a complete and utter fraud.) What these audiences pay for is content that both signifies intelligence and helps them justify and advance their own goals, which tend to involve starting, running, or investing in, say, ” Uber for the kitchen towel supply chain “. (I just won forty million dollars!)

The first type of intellectual tries, in a nutshell, to understand how the world works and to improve it. This person is paid as an academic and intellectual author. The latter produces self-help and comfort content for wealthy people and gets paid like a celebrity. You can imagine what kind of effect these inducements would have on anyone, especially someone like Pinker who was already criticized relatively early in their career for, more or less, using fancy scientific rhetoric to justify the status. quo. This is how we end up writing a book celebrating “rationality” in 2021, whereas we have already written a book celebrating “the affair of reason” in 2018, for example. When your appetite for money and attention exceeds the freshness of your ideas, you can always repeat the same thing, or even say something that doesn’t make sense.

Which brings us to the subject of Pinker in the above passage: how rationality has been viewed as disrespectful in the modern age. If it’s not clear from the ‘joke’, which I guess is that the words a youngster might have used in 1993 demonstrate an inherent lack of seriousness, he thinks the reason unfortunately was. subject to concerns about structural inequality and racism. (What he specifically says is that “trendy academic movements like postmodernism and critical theory … hold that reason, truth, and objectivity are social constructs that justify the privilege of dominant groups.” , which is too broad a statement to cover here.) This topic has been of interest to Pinker for some time. As a Brandeis professor named Joel Christensen said in 2019, he is part of a “cadre of older male academics, mostly white” – there are also a lot of former white magazine journalists in the frame – who have created a thriving industry. to defend “freedom of expression”, both as a social norm and as a supposed engine of human progress, against so-called enemies such as identity politics, political correctness and critical pessimism in general.

There is a lot of gold in these hills, but on the other hand, look what it does to your writing! Ouch. (To be clear, I’m not saying that everything a left-wing scholar says online is accurate, insightful, or not ridiculous. I to do means that making fun of the phrase “da bombe” in 2021 is a depressing way to pay your mortgage.)

By the way, that’s what Faces of Meth is. Complain about enlightenment as a career strategy: not even once!

No increase in engineering school fees this academic year