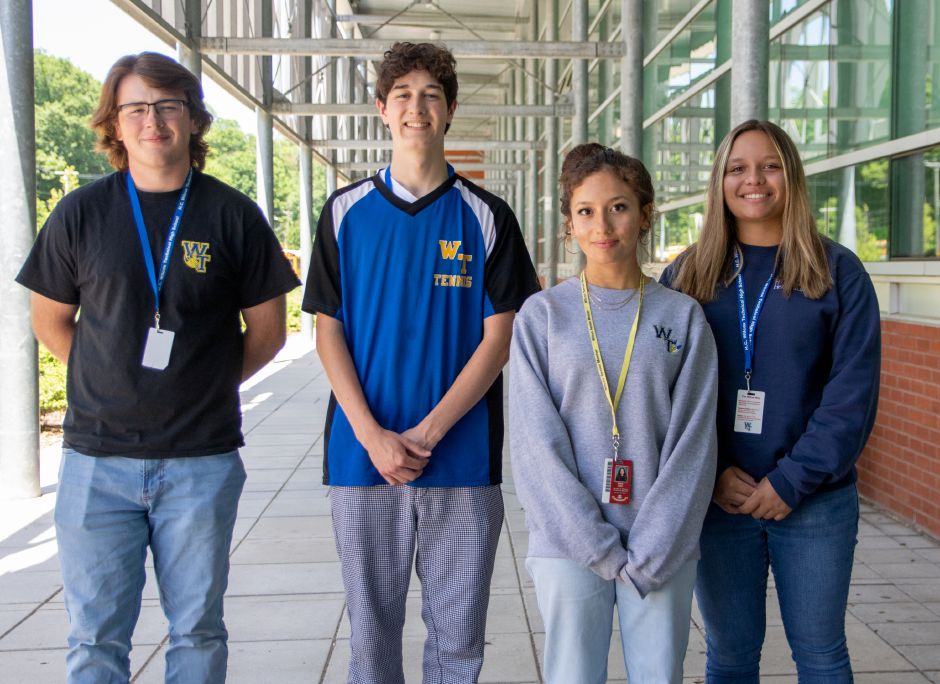 STUDENT-ATHLETES: Diaz was a gem for Wilcox Tech

MERIDEN — The Wilcox Tech women’s tennis team had one of its best seasons this spring, going 15-5 and the No. 10 seed in the Class M state tournament.

A staple of the lineup was Perla Diaz.

The senior co-captain held down the No. 2 single and set an 11-9 record.

Diaz was also one of the main academics on the team. A four-year honors student, she graduated with a 3.9 grade point average.

Diaz was a two-year starter in tennis. In football, she was the starting sweeper for three seasons and was a key part of Wilcox Tech’s 2020 Connecticut Technical Conference championship team.

She coached the Wilcox basketball team and served as a senior mentor.

“Perla was the heart and soul of Wilcox’s tennis program,” said coach Rob Janiga. “She’s small in stature, but she’s a fierce competitor. Her leadership skills were critical to the success of our program this year, which included seven freshmen competing at the varsity level.

Perla Diaz was one of five Record-Journal athlete-scholars selected by their coaches at Wilcox Tech for the 2022 spring season. Here are the others.

■ Luke Frommelt, men’s tennis: Record-Journal athlete-scholar in cross-country and tennis, Luke Frommelt is back for the spring season of his sophomore year.

The National Honor Society inductee holds an academic average of 103.13.

Frommelt played number 3 in singles this season for the Wildcats. He will prepare for the fall cross-country campaign with the Milford Running Club.

This spring, Frommelt volunteered at the Daffodil Festival.

“An enthusiastic learner and a hard worker,” said Wilcox tennis coach Paul Korik. “Very humble and emotionally resilient on and off the pitch. He makes coaching a joy.

■Jacob Long, golf: This junior was No. 2 on the roster as the Wildcats headed for this year’s Connecticut Technical Conference championship.

Long posted the second-best scoring average on the team, getting particularly hot late in the season as Wilcox captured the Nutmeg Division title and qualified for the CTC Championship Game.

Academically, after earning honors for a 12th consecutive semester, Long holds an academic average of 92.7. He is enrolled in the electronics program.

Outside of school, Long is all about the outdoors. He enjoys cycling and skiing, and he works in a ski equipment store.

Wilcox athletic director and golf coach Steve Wodarski is thrilled Long has another year to go on Oregon Road.

“One of the most dependable people in school, Jacob can always be counted on to rise to the occasion of the bonds or to help his classmates when needed,” remarked Wodarski. “A true student-athlete and leader in the Wilcox community, I look forward to having him here at Wilcox for his senior year.”

■Jack McGovern, baseball: With an academic average of 100.1, Jack McGovern ranked 6th in the Wilcox Tech Class of 2022.

His baseball numbers were just as robust. A college player since freshman year, McGovern made All-CTC this year after batting .551 with 11 extra hits and scoring 31 runs.

He was a member of the National Honor Society and captain of the baseball team, which went 15-5 and won the No. 7 seed in the Class L state tournament.

■Leeana Ortiz, softball: Four-year college veteran Leeana Ortiz was the shortstop and senior captain of a Wildcats team that went 13-7.

A member of the Health Tech program, Ortiz compiled an academic average of 103.08. She took UConn courses at St. Joseph’s University, was inducted into the National Honor Society, and graduated No. 10 in the Wilcox Tech class of 2022.

It is a presence that we will miss.

“Leeana is a team leader,” softball coach Bill Balch said. “She is also a senior mentor at Wilcox, which means she came to school when the rest of her class was home. She stayed late most days. She led her teammates on and off the pitch.