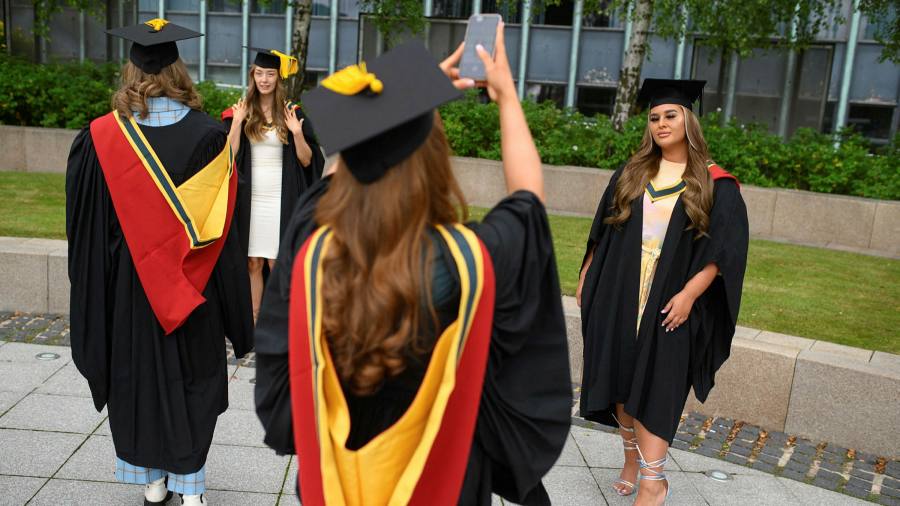 Millions of recent graduates and former graduates fear the budget will confirm changes to the student loan system, which have been called a tax raid on Generation Rent.

This week, the Financial Times reported that the government was considering lowering the salary threshold at which graduates start repaying their loans from £ 27,295 to around £ 23,000, meaning low wages would pay back several thousand pounds of more than in the current system. .

Money saving expert Martin Lewis has pledged to confront the government if any changes apply to existing graduates, saying it would be “an absolute violation of natural justice.”

Once a contract is signed, no commercial loan provider can retrospectively change the terms and conditions without a deal – but the government can if they choose.

You might call them loans, but student financing is more like a graduate tax. Nine percent of income above the repayment threshold is automatically deducted from your payslip until you’ve paid off all debt and interest, or 30 years have passed.

Today, a graduate earning £ 27,295 would have to pay nothing. If these changes occur, their annual take home pay would be reduced by more than £ 800. If you’ve already started paying off your loan, you can expect annual payments to increase by around £ 400.

This would put a real strain on the finances of low-income early-career graduates, who are already at risk of being hit by higher national insurance payments next year. However, starting earlier could reduce the total amount that top earning graduates pay back over their lifetimes, as they are more likely to write off their loans within 30 years, saving thousands of pounds in interest.

The interest rate on student loans is linked to inflation (RPI), which poses an additional problem. I was contacted this week by parents who were wondering whether they should help prepay student loans or fund college fees from their own savings.

Much depends on a student’s future earning capacity, which is a difficult thing to predict, says Ben Waltmann, senior research economist at the Institute for Fiscal Studies.

He proposed estimates based on the earnings of graduates at age 30 (by this time people tend to be more established in their careers and their lifetime earnings are slightly easier to model). He has also taken on average debts of £ 53,000 for English students starting their classes in 2021.

Under the current system, the IFS estimates that around a third of graduates who earn a salary of £ 40,000 by the age of 30 will end up repaying more than they borrowed in real terms given accrued interest. . If they earn £ 45,000, the proportion rises to about half; per £ 50,000 it will be about two-thirds.

“As a general rule, if they are expected to make over £ 50,000 by age 30 and are looking to stay in their careers, there is a good chance that they will repay more than what they borrowed if they pay back on time, “says Waltmann.

For these graduates, it might make sense to prepay the loans, but how would those assumptions change if the repayment threshold fell to £ 23,000?

According to the IFS, about a third of graduates earning around £ 35,000 by the age of 30 would then repay more than they borrowed; going from half to around £ 40,000; and two-thirds to £ 45,000. So, if the reduction continues, it might make financial sense for parents of children with slightly lower early career incomes to consider this strategy.

Of course, making an initial investment of £ 53,000 is something only the wealthiest parents will be able to afford. It’s also a huge bet on your child’s future income potential. Your child may never have to repay so much if he settles for a lower paying job, takes an extended career break to raise a family, or is unable to work due to poor health.

Waltmann also urges families to consider the opportunity costs of locking in that money. “It all depends on what else parents or grandparents are going to do with the money,” he says.

The obvious alternative is to offer a lump sum in cash to use as a property deposit. In terms of monthly expenses, paying off a mortgage might just be cheaper for your child than renting a similar property. Since student loan repayments will reduce what they can borrow from mortgage lenders, a larger deposit could also help them earn a better interest rate.

The wealthiest families can afford to do both. .

Another fact to consider is the level of interest your child is paying on their student loan. While they are studying, this accumulates at RPI plus 3 percent (currently 4.2 percent). When they graduate, the interest rate depends on what they earn.

Currently, those who earn below the repayment threshold are only charged the RPI. However, this is steadily increasing, with those earning over £ 49,130 ​​charged RPI plus 3%.

“If they earn above the upper interest rate threshold early in their careers, they’re likely to pay it all,” Waltmann adds.

Will young workers be tempted to recoup some valuable pounds by opting out of their occupational pension plan? I hope not

In the United States, families traditionally start saving in a child’s college fund from birth. If families on this side of the pond adopt the same savings habit, they could take advantage of Junior Isas’ tax benefits. These allow you to subscribe up to £ 9,000 per year until your child is 18.

I fully appreciate that reading the tax benefits offered to the richest is of no use to graduates like me who come from more ordinary backgrounds.

I was proud to see my three stepchildren graduating from college, but all returned home afterward for a while, and one of them lived at home while studying to minimize debts . It won’t be an option for all families, but I predict that we will see an increase in both trends. However, my biggest fear is that bright kids from less wealthy backgrounds will be discouraged from going to college.

Finally, think about the dire consequences for youth budgets. In the future, if a graduate earning more than £ 23,000 gets a raise, more than 42% of that could be absorbed into income tax, national insurance, student loan repayments and the new tax on social care.

Will young workers be tempted to recoup some valuable pounds by opting out of their occupational pension plan? Hopefully not, as that might undo the good work of auto-enrollment all at once. If Generation Rent grows up to be Generation No Pension, it will be a terrible lesson for all of us.