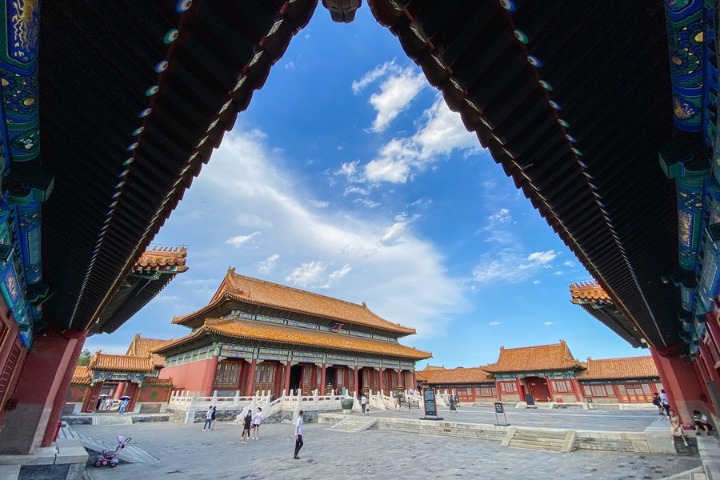 The project, the Taihe Visiting Scholar Fellowship Program, will benefit scholars from academic institutions and museums at home and abroad and promote the internationalization of studies surrounding the Palace Museum, according to the museum.

The Palace Museum, China’s imperial palace from 1420 to 1911 and also known as the Forbidden City, houses over 1.86 million cultural relics and remains the largest ancient wooden architectural complex in the world.

Taihe Dian, or the Hall of Supreme Harmony, where the most important ceremonies took place during the imperial years, is the highest palatial construction in the Forbidden City.

Wang Xudong, director of the museum, explained that the choice of Taihe as the name of the program reveals an ideal for building a world of the greatest harmony.

“The Forbidden City not only bears some 600 years of history as a royal palace,” Wang said. “It’s also a microcosm of the brilliance of thousands of years of Chinese civilization. In the new era, our mission is to find new ways to bring Chinese culture better to the rest of the world.

“We have a great vision to make this museum a ‘guest house’ for exchange and mutual learning of different civilizations,” he said. “But this cannot be achieved through our own efforts alone. Openness is essential in this rapidly changing world, and the spread of culture cannot be one-way. It must be reciprocal.”

According to the Palace Museum, the fellowship program will annually sponsor foreign scholars to carry out three to six months of research at the museum. Up to five international researchers will come to the museum in 2023.

On the other hand, several researchers from the Palace Museum will be sponsored by the program to stay from three to twelve months in foreign institutions for their own academic projects. Up to five researchers will participate in this program next year.

Wang pointed out that as disputes and conflicts emerge in the modern world, such a program could help clear up misunderstandings and build trust between countries.

Applications for the program can now be submitted via the museum’s website. The deadline for those applying this year is October 20.

The program is sponsored by the Hong Kong-based Ng Teng Fong Charitable Foundation, which has cooperated with the Palace Museum on several key projects, such as the restoration of ancient architecture, youth education and vocational training. The foundation will provide about 12.8 million yuan ($1.85 million) to support the first five years of the program, from 2023 to 2027.

Improve the social, emotional and academic growth of students