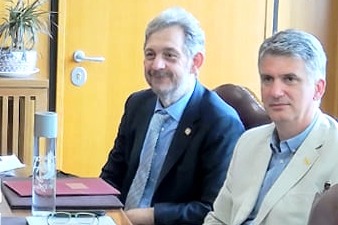 The University of Patras and its Exciting Silk Road Adventure: Establishing a Solid Sino-Hellenic Academic Framework

At the University of Patras (UoP) (www.upatras.gr/en), cutting-edge research responds to a mission of excellence in teaching. Its departments are also committed to championing new ways of thinking and developing solutions to complex global issues across all disciplines. Founded in 1964 in Patras, the capital of the region of Western Greece, it has gradually built its own academic history, now serving all the main branches of knowledge in medicine and health sciences, engineering, natural sciences, agriculture, humanities and trade. Its activities are supported by 700 professors and an equal number of teaching, technical and administrative staff. Education is channeled through fully accredited undergraduate and postgraduate programs, complemented by lifelong learning and training initiatives, explained Professor Dionissios Mantzavinos, Vice Rector for Academic and International Affairs . The unwavering commitment of the university to internationalization is the determining factor of its contemporary image. The 700 inter-institutional mobility agreements for study and teaching inside and outside the European Union are part of the university’s vigorous internationalization policy and support a large, dynamic community. and cosmopolitan.

Over the past decade, UoP has developed strong relationships with Chinese universities based on mutual trust and respect for cooperative research and teaching of the highest academic standards. It all started when, within the framework of the Erasmus Mundus program of the European Union, the Department of Philosophy of the School of Humanities signed a partnership with the School of Philosophy of Renmin (Beijing), said Professor Pavlos Kontos, head of the department. In this context, Chinese students have taken postgraduate courses at UoP and, thanks to UoP, they have been accepted into doctoral programs in Europe and the United States. At the same time, faculty members from both sides traveled to Patras and Beijing respectively to teach postgraduate courses, which led to lasting and lively scientific synergies.

The next step, more comprehensive in nature, is a joint academic program agreement between the Greek Department of Xi’an University of International Studies and the UoP School of Humanities. Chinese students must complete their third year of undergraduate studies in Patras. The importance of this agreement cannot be overestimated; Chinese students are expected to stay in Patras for one or two semesters, taking academic Modern Greek courses together with Greek students. They will certainly serve as ambassadors of modern Chinese culture in Greece and, when they return home, as ambassadors of modern Greek culture in China. In addition to this, Xi’an University has agreed to host a UoP faculty member as a visiting scholar every two years.

These initiatives, as important as they are, are still small in scale, at least when compared to the next two, Prof Kontos said. The first concerns a two-year English-language Master’s program entitled: “Greek and Chinese Civilizations: A Comparative Approach”. It is no exaggeration to say that this Master’s program is one of a kind in the world. It was created after an agreement between, on the one hand, four Greek institutions (namely, UoP, National and Kapodistrian University of Athens, University of Crete and Aristotle University of Thessaloniki) and, on the other hand, Southwest University (Chongqing) . The Master aims to provide graduate students with solid and in-depth knowledge in the scientific field described in its title, as well as to promote scientific research and other collaborations between the institutions involved. The first year of studies will be taught at Southwest University and will be devoted to the study of Chinese culture, while the second year will be taught at UoP and will be devoted to Greek culture with an emphasis on philosophy and ancient Greek science. It should be mentioned that the completion of the program includes a master’s thesis which is expected to address the issues of Greek and Chinese civilization and, therefore, will be jointly supervised by a Greek and Chinese faculty member. At least it shows how much we are investing in the truly comparative nature of the program. This initiative was officially launched on May 6, 2022 during a ceremony involving the ambassadors of China in Athens and Greece in Beijing, officials from the Ministry of Education of the two countries and the rectors and vice-rectors of the two universities.

Finally, the most ambitious project is the creation of the so-called “International Institute of Engineering of Patras”, which, in simple terms, is the creation of a UoP campus in China, explained Vice Rector Mantzavinos. This initiative, which takes place between UoP and Fujian University of Technology (FJUT), aims to establish joint undergraduate programs in four engineering disciplines, namely civil engineering, mechanical design and manufacturing. and automation, electrical engineering and automation, information and computing. . The joint programs will be offered to Chinese students studying at FJUT with a number of courses taught by UoP instructors. This initiative, which has been warmly welcomed by the Ministry of Education of the two countries, as well as the region of Western Greece and the province of Fujian, is expected to expand further to include joint graduate and doctoral studies.

There is no doubt that globalization is a strategic choice for the University of Patras and this requires strengthening our key partnerships with our traditional allies across Europe and in the United States, but, more importantly, exploring new opportunities in China and the Far East, said Vice Rector Mantzavinos. In this regard, the 50th anniversary of diplomatic relations between China and Greece this year provides the perfect setting for an inspiring Sino-Hellenic academic setting.

MSF to governments negotiating at the WTO: getting it right and adopting the real TRIPS waiver – Monde