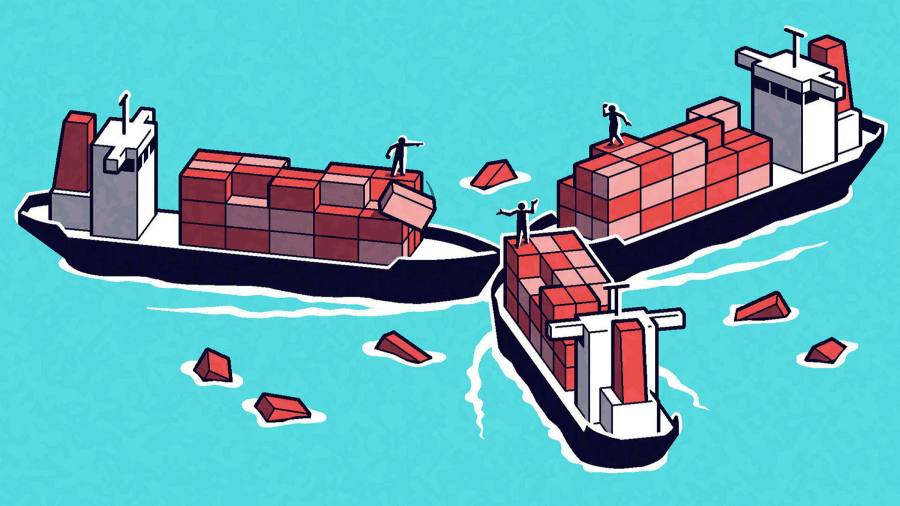 The world needs a 12-step program for better trade

Today, the global trading system looks more and more like a failed 12-step program. The first step is to admit that there is a problem. Unfortunately, few actors seem willing to say so. The rare exception is US Trade Representative Katherine Tai, who just days ago called for an end to willful blindness to the failings of the current global trade paradigm.

“We can’t just go back to the world in 2015 and pretend these things didn’t happen,” she said during an appearance at an innovation conference in Munich.

She was referring to populist responses – including Brexit and the election of Donald Trump as President of the United States in 2016 – to the globalization of the status quo and the liberalization of trade. But she also had in mind supply chain resilience issues and the differing political values ​​exemplified by both the pandemic and the war in Ukraine.

“I think a number of things have happened,” Tai said, “that make me wonder if this vision of globalization leading us to a better and safer world has run its course and if we don’t ‘t need a course correction to pass us forward.

Let’s be clear: neither Tai nor the Biden administration in general is channeling a “make America great again” vibe here. Indeed, Biden called MAGA supporters the most dangerous political faction in the United States last week in response to the leaked Supreme Court text on abortion rights.

Global trade liberalization for itself has reached a limit; and we have to find a new balance

But the United States is openly say what politicians and the public in many countries silently think: the World Trade Organization is broken; the liberalization of world trade for itself has reached a limit; and a new balance must be struck between international trade and domestic politics.

If you look beyond the rhetoric, this truth is at the heart of nearly every great business story of the moment. Consider that more than two years into the pandemic, and a year after the White House announced support for a so-called Trips intellectual property waiver on Covid-19 vaccines, the world is still waiting for a text. agreed , not to mention the resources, that would allow poor countries to start bypassing intellectual property barriers to create their own vaccines.

Part of it is pharmaceutical lobbying on both sides of the Atlantic, and part of it is the spaghetti bowl of international intellectual property interests. The WTO secretariat is trying to push through an agreement (which some believe won’t change anything) before the 12th ministerial conference scheduled for June. But the virus — and politics — are moving too fast. Even if the WTO were able to orchestrate a meaningful agreement on a waiver, the virus itself is likely to have mutated before the world could receive updated vaccines.

All of this underscores the need for a new, better and faster way to resolve trade disputes – every country wants reform of the WTO but, of course, on different issues – particularly in relation to intellectual property, where the vast majority of the world’s wealth resides.

Some of the most contentious transatlantic issues regarding digital trade, data protection, patents and other types of intellectual property rights were to be resolved by the United States-European Union Trade and Technology Council, which will meet in Paris in a week. Since the United States and Europe have important but different horses in the race for the Internet of Things (American technology platforms against European industrial companies), the TTC was supposed to be a place to start determining who gets what part of the digital wealth pie in the future.

But the TTC’s own bandwidth is now devoted to the fallout from the war in Ukraine and what the United States and Europe should do to build more resilience in supply and energy chains.

We can expect much of the conversation to be spent discussing what additional sanctions or export controls should be imposed on Russia, how to decouple crucial supply chains from the region and how to proceed with the production of alternative energy. Plans for our digital future will be subsumed by emergency measures on the ongoing war.

Meanwhile, in the United States, wrangling continues over the merger of the House Competition Act and the Senate Innovation and Competition Act, both of which aim to improve the resilience of industrial commons in the wake of the pandemic. Semiconductor subsidies aside, the Senate bill is neoliberal business as usual. The Chamber, on the other hand, emphasizes rebuilding domestic manufacturing, while focusing more on the environment and labor standards.

All of this comes as the White House is under pressure to rethink Trump-era tariffs on China.

To use another 12-step metaphor, it would be nice if all disputes could simply be turned over to a higher power. But that’s the problem — there’s not one (including the WTO) that has proven itself capable of handling the collapse of the global trade paradigm.

Indeed, we are still struggling with the first step – recognizing the problem. As Tai puts it, Globalization 2.0 must “consider more than just efficiency” and not simply encourage the free movement of capital and trade liberalization as an end in itself.

The problem is how and where to negotiate the shape of our new post-neoliberal era.