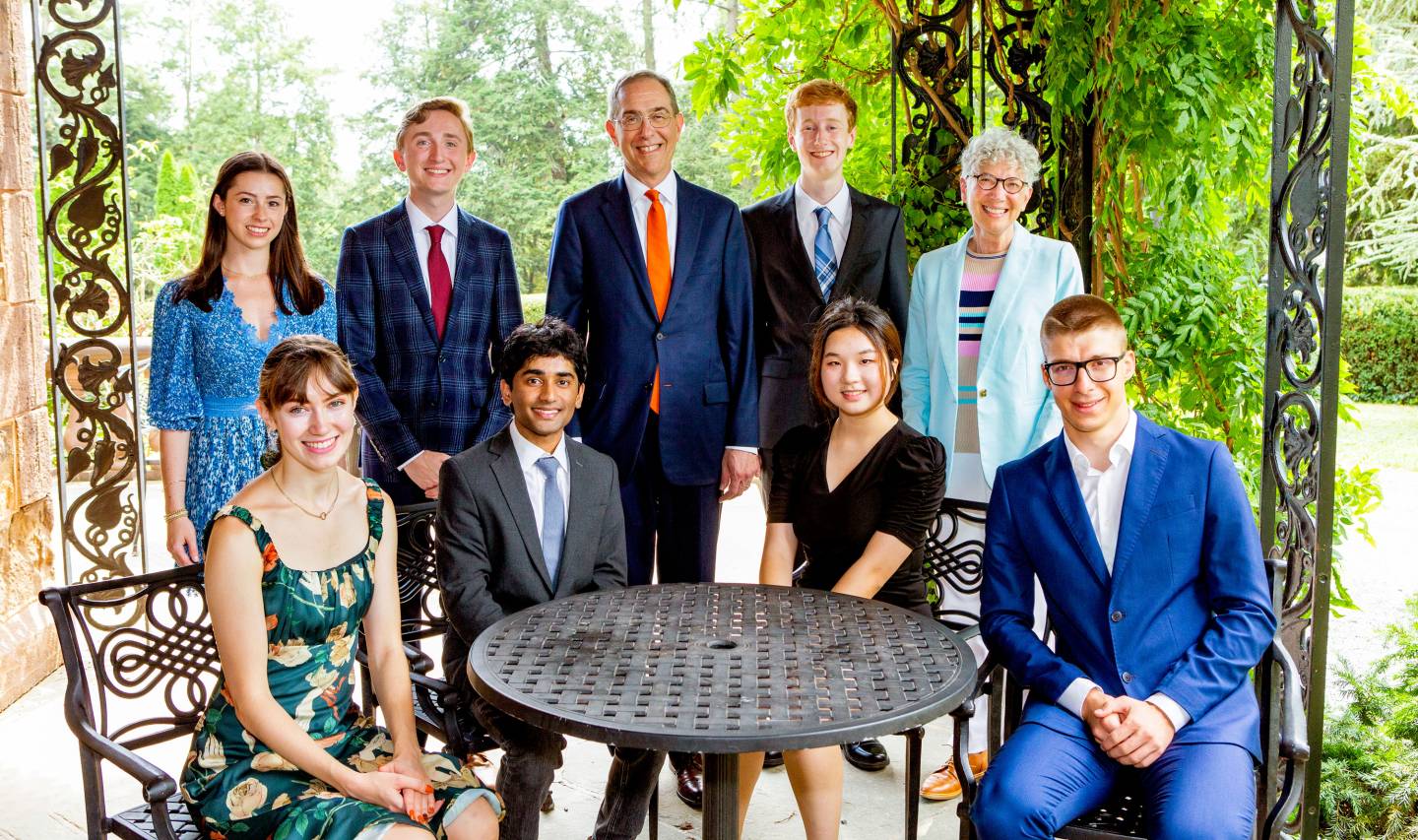 Undergraduate awards given to seven students for their academic achievement

Princeton University celebrated the academic achievements of its students by awarding four undergraduate awards to seven students during commencement exercises on Sunday, September 4.

“We are especially proud of these exemplary university students and happy to celebrate their academic achievement,” said College Dean Jill Dolan. “They have worked diligently on their studies, while demonstrating how to make the most of the many opportunities Princeton offers its undergraduate students. They offer rich and varied study programs and exemplify how you can be a successful student and a productive, well-rounded citizen of the University. My colleagues and I are satisfied with their accomplishments and proud of their commitments.

This year’s top freshman honor award is shared by Arya Maheshwari and Zhihan (Yuri) Yu. The award is given to members of the sophomore class in recognition of outstanding achievement during the first year.

Maheshwari, from Los Altos, California, attended Harker School in San Jose, California. He plans to major in mathematics and obtain certificates in Computer Applications and Applied and Computational Mathematics. He is a Fellow of Whitman College.

This summer, he was a software engineering intern at Two Sigma, a financial sciences company in Houston, along with nine other rising sophomores from around the country.

Yu, of CantonChina, participated the Affiliated High School of South China Normal University in Guangzhou. She plans to major in Comparative Literature and earn certificates in Gender and Sexuality Studies, East Asian Studies, and German. She is a Fellow of Rockefeller College.

This summer, Yu remained on campus and conducted an independent research project on early 20th-century Chinese poetry and the third-person Chinese feminine pronoun, with funding from the Office of Undergraduate Research. She was mentored by Alexis Ferguson, a Princeton graduate student in the English Department and Gender and Sexuality Studies program. Yu also studied German language and culture with German lecturer Adam Oberlin through the Princeton-in-Munich virtual program.

This year, the George B. Wood Legacy Sophomore Award is shared by Casey Beidel and Brendan Kehoe. The award is given annually to members of the junior class in recognition of their outstanding academic achievements during the second year.

Beidel, of Rutherford, New Jersey, attended Bergen County Academies in Hackensack, New Jersey. He is studying sociology and is also working on certificates in American Studies, Gender and Sexuality Studies, and Musical Theatre.

This summer he completed a PICS internship in fundraising and development at New Door Ventures, a San Francisco nonprofit organization that strives to provide young people currently disconnected from education and employment with internships, jobs , workshops and paid courses. He is a Fellow of Mathey College.

Kehoe is of South Glastonbury, Connecticut, where he attended Glastonbury High School. He majors in electrical and computer engineering and plans to pursue certificates in linguistics, robotics and intelligent systems.

He has been an outdoor action leader during freshman orientation in 2021 and 2022 and has helped lead the Princeton Model Congress since his freshman year in college and will be program director this year. A member of the Princeton Racing Electric team, he is also involved with Princeton University Players and will serve as stage manager for some of the student-run ensemble’s shows this year. He is a member of Forbes College.

This summer, Kehoe completed an internship at the High Meadows Environmental Institute with the Sustainable Cements Group, led by Claire White, associate professor of civil and environmental engineering and at the Andlinger Center for Energy and the Environment.

This year, the George B. Wood Legacy Junior Prize is shared by Beatrice Bondor and Lucy Sirrs. The award is given to members of the senior class in recognition of their outstanding academic achievements during the junior year.

Bondor, from New York, attended the Horace Mann School there. A member of New College West, she majors in English and is pursuing certificates in French language and culture, creative writing (poetry), and European cultural studies.

For her graduation thesis, she is the writing of a collection of poems, advised by Michael Dickman, lecturer in creative writing and at the Lewis Center for the Arts. The collection will tell the story of Virginia’s founding period and cultural collisions.

Outside of the classroom, Bondor is co-chair of the Orange Key Student Tour Guides, campus tours ambassador with the Office of Admissions, editor of the Nassau Literary Review, member of the Behrman Undergraduate Society of Fellows, and Fellow of the Pre- Law Society.

This summer, she studied at Lincoln College, University of Oxford as a Bread Loaf Fellow in the English Department at Princeton, including taking a pro-thesis research seminar directed by Autumn Womack, assistant professor of African-American studies and English.

Sirrs, from Missoula, Montana, attended Hellgate High School in Missoula. A member of Mathey College, she majors in neuroscience and is pursuing certificates in gender and sexuality studies and dance.

She spent her summer on campus working on her graduation thesis, which examines how hormones, specifically testosterone, affect social and antisocial behavior in mice in a variety of different contexts. Sirrs conducts her research in the lab of Annegret Falkner, Assistant Professor of Neuroscience, under the mentorship of Eartha Mae Guthman, Postdoctoral Research Associate.

Outside of the classroom, she previously served as president of the student-run Princeton University Ballet and is a member of the student-run eXpressions Dance Company. She is a mentor with the Princeton Chapter of Ballet and Books, a non-profit organization that teaches young children to read through the combination of dance and storytelling.

Alexa Milojevic received the Princeton Scholar Award for the Class of 1939, which is awarded annually to the undergraduate who, at the end of the junior year, has achieved the highest academic standing for all previous college work at the university.

Milojevic, from Belgrade, Serbia, attended the Mathematical Grammar School there. Co-winner of the Freshman First Honor Prize in 2020 and recipient of the Shapiro Award for Academic Excellence for the 2019-2020 academic year, he is a major in mathematics.

His graduation thesis is on number theory. His adviser is Peter Sarnak, Eugene Higgins professor of mathematics.

Outside the classroom, Milojevic is involved in directing and organizing the Princeton University Math Contest, a math contest written by Princeton undergraduates and hosted by high school students across the United States and abroad. He is a member of Mathey College.

Launch of a new academic session in ICT colleges